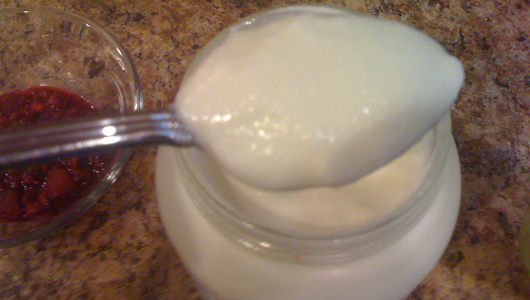 I don’t fly very often, mostly because I work in IT and I don’t have to fly all the way across the country to interact with a customer. Thanks to the magic of the internet I can tell that customer that he has no idea how technology works and how much of a fucking idiot he his without even having to leave my desk. If I have a webcam handy, I can even illustrate his stupidity with an effective demonstration involving a potato and a hammer. I also don’t fly very often because I fucking hate flying more than Oprah hates fat-free sour cream.

It’s not the act of flying itself that bothers me. I’m not afraid the plane is going to crash at all. It’s not going to crash. (Once, I was flying to St. Louis with a girlfriend and midway through the flight I looked at her and said, “Hey, want to see if I can will the plane to crash with my mind?” Then I rolled my eyes back in their sockets and began trembling slightly. Not only did this freak out my girlfriend, but it caused the lady sitting behind her to actually scream. People are fucking retarded.)

No, I hate flying because airports turn people into assholes and everything takes fucking forever. And sometimes, just to take out my frustrations, I’ll cause both of those things to happen.

“Excuse me,” I’ll ask the ticketing agent. “Is it possible to upgrade my ticket to first class?”

This, as any experienced flier can tell you, sets off a tricky 87,000 key series of computer instructions that the ticket agent will have to do numerous times, followed by her answer: “No.”

“Are you sure?” I’ll ask, as the people in line behind me begin to groan.

“Ok, then can you check to see if you can downgrade my ticket?” I’ll ask jokingly.

“Sure,” comes the unexpected reply, while the people behind me begin handing out pitchforks and torches. “Yes, sir, I can downgrade your ticket.”

“I’m sitting in coach, how’re you going to downgrade that?”

“I’ll sit you across from the lavatory.” 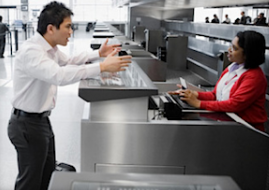 I’m sorry sir, but technically I am allowed to assign you a seat next to Carrot Top. Now, are there any other smartass comments you’d like to make?

Anyway, I’ve got an endless amount of stories involving other people being assholes in an airport, but the really funny ones involve me being a asshole. Not because I am an asshole (although the wildebeest who happens to be my ex-wife might disagree), but because that’s what airports do to people: Turn them into assholes.

Here’s a good example: I was flying to Chicago one day, and I was seated next to a very attractive young woman in her early twenties. This young woman was, apparently, really, really keen on Jesus. She sat down and immediately immersed herself in the Bible which, if she had known about my history with trying to cause telekinetic plane crashes, would have been a wise move. Once we got airborne, she opened up a laptop and began watching a full blown revival she had on DVD.

I mean, this was real laying-on-of-hands, falling-down-and-speaking-in-tongues kind of stuff. Old women cast aside their wheelchairs, fat guys in polyester spun in tight circles across the stage, and a really, really sweaty dude with a white pompadour ran around curing the fuck out of everyone. If you were there and suffered from a mild bout of gas, Reverend Whitey was a-gonna get to you, praise Jesus!

Now, I’m pretty much a do-whatever-the-fuck-you-want kind of guy, and although the religion I happen to have been exposed to is much more reserved, I don’t necessarily look down upon people who twitch and whirl and say things like, “Ashkebabblealalalalalalalalala!!!” After all, I spent a few years in college behaving in quite the same fashion. 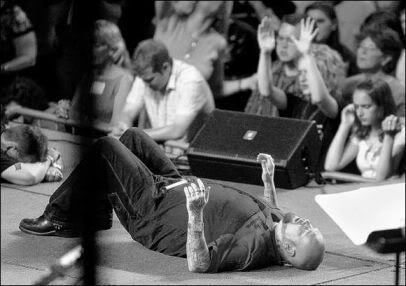 This is either speaking in tongues or jazzercise, not sure which.

But this girl was getting fucking INTO it. She began bouncing around in her seat and emitting a low humming sound. It was kind of amusing at first, but soon, as she found herself transported into religious ecstasy, she forgot that she was wearing headphones and would emit a surprisingly loud, “AMEN!”, scaring the Savior out of everyone in nearby rows.

Finally, after a couple of hours in the air, she turned off her laptop, closed her eyes, and went to sleep. This is when I was given some yogurt.

Now, anyone familiar with living in the mountains can tell you that the change in altitude does some weird things to consumer goods. For instance, if you buy a can of Pringles and drive to the top of a mountain, the air pressure inside the sealed can is a lot greater than the air pressure outside, and when you open the can, it will emit a popping noise as the air rushes out of the can.

The same holds true for yogurt that has been packaged on the ground, but served in an airplane. And when I opened the yogurt, it fucking exploded, shooting its contents all over the young, sleeping woman beside me. My first reaction was to apologize, but before I could do so I realized a couple of things:

She looked like Lindsay Lohan on any given Tuesday afternoon. 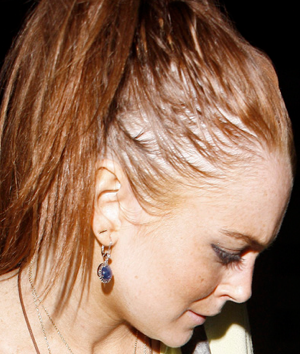 So of course I did the whole guilty, look around to see who else had seen this. No one. Not a soul.

“Ewww! What the hell is this?” I envisioned her saying as she woke up.

“Man, you missed it. The captain came out of the cockpit, totally beat off in your hair, then parachuted out the back. It was fucking crazy!”

No, if she discovered this, I was probably going to take the fall for it. Other scenarios ran through my mind. 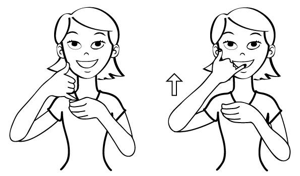 The captain announced our imminent arrival, and Tara Reid over there woke up. I feigned a sudden interest in Sky Mall magazine as I watched her with my peripheral vision. No reaction that I could see. Finally, I decided to brave a direct look.

So as I turned to look at her, there were only three possibilities that I could think of:

..and I really didn’t think it was going to be that last one.

After what seemed like months, we touched down and began that awful wait. You know the one I’m talking about: You’ve flown for a zillion hours, you’ve arrived, and now you have to spend an ungodly amount of time standing there because some asshole can’t get the refrigerator he jammed in the overhead out. My flying companion stood there, still unaware of her floozy-like ‘do as I sweated bullets and considered going on the offensive. “What was up with that guy moaning behind us? Did you hear that? He smelled like hand lotion too!” 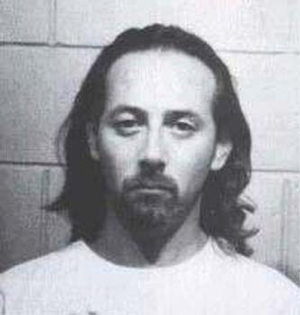 Incredibly, I managed to make it to the jetway without my dairy-related mishap coming to light, and from there I just took off and never looked back. I imagine some stern, Midwestern preacher going to the airport to pick up his daughter and…

“Hi honey, how’re… WHAT IN THE NAME OF HOLY JESUS WERE YOU DOING ON THAT PLANE?” He probably still thinks United Airlines is run by Satan.

A year later, I had a similar episode with a packet of salsa. The lesson? When I fly, I should be given a row all to myself for the greater good of all.

Ok, on to what happened the last week while you decided you weren’t going to be eating yogurt for while.

Wow, I didn’t do shit last week. (To be fair, a lot of that had to do with the fact that I had my son’s 7th birthday going on, as well as the Chicago Blackhawks romping their way through the Western Conference Finals.)

Ok, that’s it. Remember, always ask for the aisle seat so you can flee when the yogurt arrives.