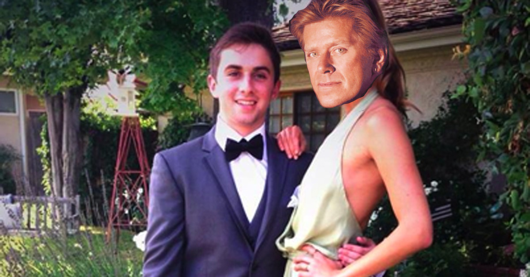 I had a weird dream last night, but I’ll try not to bore you with it. I hate it when people try to unload their dreams on me. “I was in this school bus, only it was more like a plane, but had seats like a school bus and a swimming pool in it for some reason. And the driver was a spider, although he looked like a bus driver, but I knew he was a spider, you know what I mean?” No, I don’t know what you mean. That dream, like most, is a first draft at best. Edit the shit out of that thing before you share it with people because it’s pointless, makes no sense, and is a total waste of everyone’s time. Dreams are exactly like the Twilight movies.

So here’s mine: I was back at my high school prom, and sitting at a table was Peter Cetera, wearing a tuxedo. He asked me if I could spit the song Yankee Doodle Dandy. I replied that I probably could, but didn’t really want to. He responded by making those disgusting phlegmy noises people make when they’re about to produce what we in high school referred to as a “loogie”, and then spit it on the floor.

“That’s disgusting,” I said, which elicited a maniacal laugh from Peter Cetera, who proceeded to do it again. End of dream.

What are we to make of this dream (other than the obvious fact that maybe six grams of mushrooms before bed is a bad idea)? Well, first of all, we should all agree that Peter Cetera is a foul and disgusting human being who needs to be deported to some place equally foul and disgusting, such as a smoldering Guatemalan trash heap about to receive an airlifted supply of soiled diapers. If you think it’s hard to say you’re sorry now, Cetera, just wait until you try to say it with a mouth full of used Pampers. Asshole. 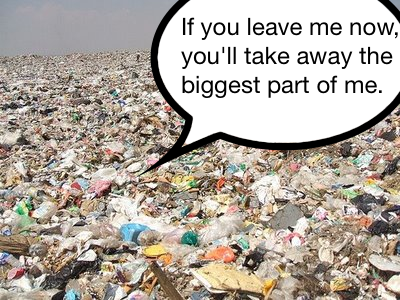 The interesting part of the dream for me was to relive prom night, if only for a few brief moments. Americans seem to have a strange fascination with the prom. For teenage guys, this is understandable because if you’ve got a steady girlfriend, you’re almost certainly going to Get Some after the prom. That alone was worth spending an obscene amount of money on a ridiculous tux and a corsage. But the rest of the prom was just bullshit. I (along with every other heterosexual teenage male in the known universe) would’ve greatly preferred it if we had skipped the dance altogether and just boned our dates when they answered the door.

But women have this funny idea in their heads that guys should act like human beings, not apes on Viagra, and so I had to go through the whole courtship ritual of taking her out to dinner, taking her to the dance, dancing with her, and telling her how very much she meant to me before I was allowed to ram it home in the back of a Chevy Impala parked behind Denny’s. 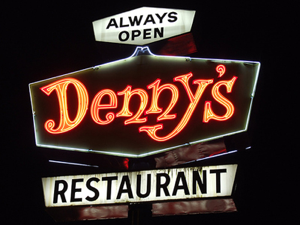 Denny’s: Because orgasms are better when followed up with Moons Over My Hammy

So the fascination people have with the prom is… something. I don’t know. You want insightful analysis, go read the Op Ed section of the New York Times, I only tell stories about getting loaded and hurling threats at B-list celebrities (Suzanne Somers knows what I’m talking about, that bitch).

I do know that after having gone to prom my junior year of high school, I opted out of attending it senior year. Why spend all that money on a tux, tickets, etc., when we could be drinking luke-warm beer in someone’s back yard? Surprisingly, my girlfriend during senior year had no problem with this. She was all for blowing off prom to attend a huge party taking place out in the sticks. But there was a complication: The guy she’d broken up with a few weeks before prom.

Mikey: Hey, Greg, can I ask you a question?

Mikey: Do you mind if I take your girlfriend to prom?

Both Mikey and Suzy had already dropped a bunch of money on fancy prom duds, and while Suzy was cool with not going, Mikey was a senior, didn’t have a chance to go the year before, and couldn’t find a date. Suzy felt bad about the situation, and she was cool with it, as long as it was just prom itself she was going to, and not anything afterwards.

Mikey: No funny stuff, I promise. I just want to go to prom and have a good time, you know? It’s my only chance.

Me: This is beyond weird, right? I mean you see that, don’t you?

So during prom night my senior year, I was drinking beer until about 11:00 PM, and then I had to go back to the high school to pick up my girl friend. The school had become leery of letting students drive because of the whole drinking and driving thing, so everyone came back to school on a school bus. Suzy got off, and I pulled up next to her in my ever so classy banana yellow station wagon. “C’mon, babe. Let’s roll! See ya’, Mikey!”

“Yeah, hey, thanks man. I really appreciate it.”

I felt bad for Mikey as we peeled out of the parking lot, cracking beers before we’d even gotten off of school property. (Note that the school’s fears re: drinking and driving were well founded. We were all idiots.) I even asked if we should go back and invite him to go to the party with us. “No,” said Suzy. “It was really nice of you to let him take me to prom, but do you know how awkward it is going to prom with your ex-boyfriend?”

I’m guessing that was pretty awkward, but not nearly as awkward as getting asked by Peter Cetera if you could spit Yankee Doodle Dandy. 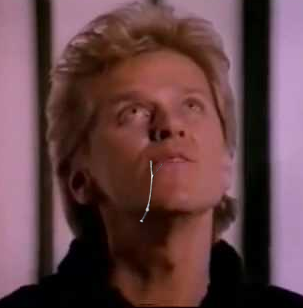 Yeah, that’s supposed to be drool/spit. I know, that’s not what it looks like. Take it up with Cetera.