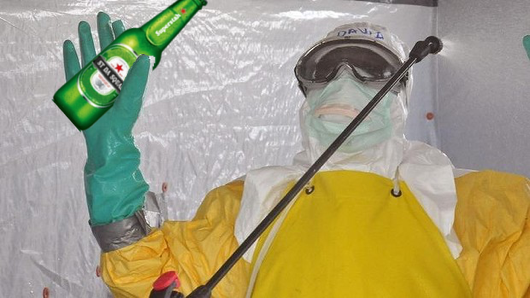 If you’ve been a long term Dogs on Drugs reader, you may have noticed that I haven’t posted anything during the last couple of weeks. That’s the longest I’ve ever gone without posting, and I believe that my readers deserve an explanation, so here it is: I took a leave of absence for medical reasons. More specifically, I took a couple of weeks off to better serve my community by ebola-proofing my neighborhood. Sure, I raised a few eyebrows when I began nailing cow tongues to front doors in order to ward off evil spirits. And yes, people became “concerned” when I bought a high powered hose and began blasting bleach through mail slots and into people’s homes. And ok, maybe I did go “completely overboard” when I began viciously pistol-whipping anyone caught outdoors not wearing a hazmat suit. But you know how many cases of ebola have been reported in my neighborhood? None, that’s how many. My record speaks for itself. Who’s laughing now, enraged neighbors? Well, ok, the enraged neighbors are. Jesus, you’d think they’d never seen someone get tased in the neck and dragged off in cuffs before. END_OF_DOCUMENT_TOKEN_TO_BE_REPLACED