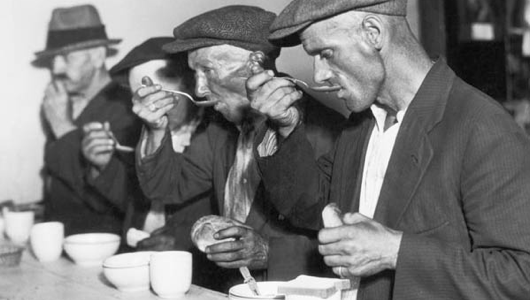 You know it’s coming, you feel it in your bones.  A second Great Depression is on its way.  The good news is that it will make the first Great Depression look like a walk in the park and we can finally mouth off to those obnoxious elders who were always telling us things like, “In my day, we got an orange for Christmas, and we were glad to get it!”  Oh yeah?  Well my sister just blew a dude for the protein, asshole!  The bad news is that we won’t be joking.

So we’re going to need to start planning now if we’re to get through it alive, and the first thing we need to address is what we’re going to eat.  Luckily, there are options.  Horrifying, disgusting, never-in-a-million-years type options, but hey, it beats “protein”.

Shoe Leather – We’ve all seen the stereotypical 1930’s cartoon bum, starving and desperate, boiling a shoe down by the rail yards.  Comedy gold, no?  But that idea didn’t just randomly pop into the mind of your normal, heroin-soaked comic strip artist.  You can, in fact, eat leather goods in a pinch.  The snow-bound members of the Donner party did it, Lewis and Clark did it, and hell, even noted film director Werner Herzog did it.  If it’s leather (shoes, belts, jackets) you can eat it.  Just be sure to boil the everloving shit out of it because these days, leather is prepared with lots of chemicals and dyes.

Fertilized Duck Embryos – What do you do if you find yourself in the Philippines unable to get it up?  If you said, “Greg, I’d eat a fertilized duck embryo, boiled alive and eaten in the shell,” then I’d like to cordially invite you to come over to my house so I can punch you in the face, you sick fuck.  But that’s what Filipinos do.  The dish, called Balut, is considered a delicacy and is often served with beer.  Good thing, because I’d have to be absolutely shitfaced to try it.  So why sit around starving to death when your local park or zoo has probably got a whole bunch of ducks waiting for you?  And no, you can’t just eat the adult duck.  That’s cheating.

Cockroaches – Since you probably won’t be able to afford the Orkin Man any more, you should be able to round up a few of these.  I mean, it sounds a bit gross, but it’s a good source of…  OH SWEET JESUS, NO!!!

Yourself – There’s one food source that’s bound to be at hand no matter how poor you get, and that’s yourself.  And while self-cannibalism is usually seen only in mythology and Hannibal Lecter movies, there has been at least one real life person who looked in the mirror one day and thought to himself, “Yum!”

In 1876, Guillaume de Nittis was feeling a little… down.  So he did what any normal person would do, assuming that person had just drank a gallon of varnish:  He ate his left forearm down to a stump.  When he was then placed in protective custody, he ate off his left foot.  Informing doctors that he would continue to eat himself until only his teeth were left, he then celebrated the 100th anniversary of American Independence with a stunning display of flexibility and chewed off his fucking nuts.

Something So Sick And Twisted You Won’t Fucking Believe It – I’ll warn you ahead of time, this is so fucking out there that it is recommended that you ask small children to leave the room and then leave with them, never returning or even going on the internet again. Look, there’s gonna be a lot of dead or dying people around when the financial shit really hits the fan.  If this was just about eating a haunch of dead guy, it wouldn’t be so bad.

What would be so bad would be to take a dying person, force feed them nothing but honey until they die, put them in a stone coffin filled with honey, wait 100 years, open the coffin, and then… chow down, I guess.  That is fucking rank beyond belief, as it almost assuredly did not “taste like chicken”.  The “dish” is called Mellified Man and unbelievably, it is not a joke.

Nothing – Here’s something that you’ll probably have a whole lot of.  And what’s more, according to Breathatarians, you can live off of nothing but light.  All I know is that after Mellified Man, sign me the fuck up.

« Previous post
Twenty-Two Skidoo! or I Am No Longer Hep to the Jive
Next post »
Awesome Headline of the Week