The Official Dogs On Drugs Guide To Rubbernecking 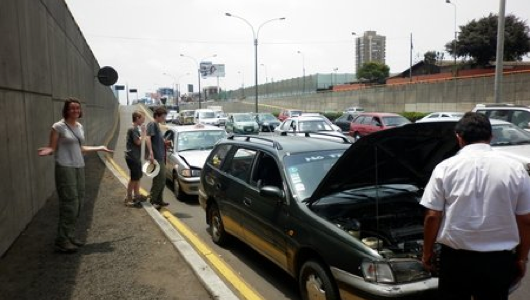 Let’s say you’re a 16 year old moron who just got his license.  Or a thoughtless senior citizen needing to brush up on the rules for a driver’s license test.  Maybe you’re new to this country and don’t know the rules of the road.  Or maybe you’re just a knuckle-dragging, mouth-breathing, waste of genetic material with a vicious body odor problem and an IQ of 14.  Whatever the reason, you’ll need to become familiar with traffic laws and to judge by my morning commute, there’s one law in particular you’ll need to know about.  So it is in the spirit of public service that we proudly present the Official Dogs On Drugs Guide To Rubbernecking.

You may be asking yourself, “What is rubbernecking?”  Webster’s dictionary defines rubbernecking as a male contraceptive sheath worn over the…  Wait, wrong entry.  Here we go:  Rubbernecking is the act of driving slowly past a car accident or other distraction so as to gain a better view.  It is estimated that one out of every two cars on my morning commute is actively engaged in rubbernecking at any given time, and the odds of this car being directly in front of me are 100%.

But if you are going to be a successful rubbernecker, you can’t just sit there drooling on yourself and staring out of the window.  There’s more to it than that.  For instance, first you have to ask yourself, “What should I look at?”  The answer to this is tricky.  You should look at things that are interesting, but not necessarily interesting to you.  It can be something that interests other people, such as neighbors, Belgians, the mentally infirm, zombies, inter-dimensional beings, and invisible friends.  If the thing that catches your attention could in any way be interesting to you or any of these other groups of people, it is your duty to start rubbernecking.  For instance, how many things in this scene are interesting?

If you said anything less than an infinite amount, then you haven’t gotten the hang of it yet.  Let’s take a very brief look at just a few of the interesting things to see in this photo.

And the list goes on and on.  All of these things can be construed as interesting, meaning that, as an unspeakable asshole, you are required to start rubbernecking.

How do you rubberneck?  That’s easy:  Step on the brake and slow down.  The only trick is to know how much to slow down.  The following table will help you determine your proper decrease in speed.

The first four entries make obvious sense.  The last one, however, may need some explaining.  Rubbernecking is a group sport, and although it only takes one asshole with extra chromosomes to rubberneck, it takes the rest of us to sit there hurling insults at him.  So do your fellow travelers a favor and keep them involved.  Try to engage them in a spontaneous accident which will spawn more rubbernecking, and before you know it the highway will be filled with chicks with big racks in flaming bikini tops.

How long should you remain at a reduced speed?  Somewhere between 45 minutes and forever.  Your ward attendant isn’t going anywhere, and as long as you’re sitting there furrowing your brow, trying to make sense of the insanity inherent in someone changing a tire, neither is anyone else.  And if you are present during an uncommonly interesting event such as Jesus giving the Heimlich maneuver to Santa Claus while the Tooth Fairy fellates the Easter Bunny, you may actually be allowed to take up permanent residence on the highway.  (Note:  This does not apply in San Francisco where this is a fairly common event.)

Finally, there is the question of how to deal with irate commuters who do not appreciate your actions no matter how closely you follow convention.  The correct way to deal with angry drivers is to fail to notice them in any way.  Sure, you noticed a discarded newspaper that kind of looked like the Pope at a distance, but that doesn’t mean you’ll notice the giant fucking SUV riding your rear bumper, blaring his horn, and pelting you with the contents of his glove compartment.  As a rubbernecker, you’re far too focused to acknowledge that you are not the center of the goddamn universe.

So there we have it, a concise guide to rubbernecking.  If you follow the advice in this guide, you’re well on your way to a wonderful career in fucking up traffic for the rest of us until such time as I run you off the road and kick you to death.  Assuming I’m not distracted by chicks wearing flaming bikini tops.