I Really Have To Go! 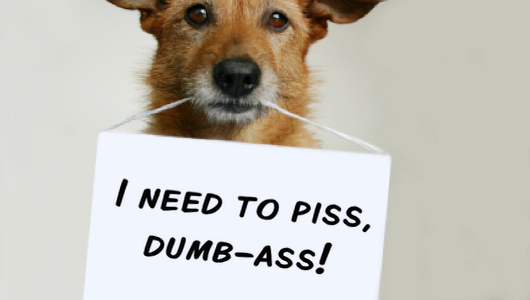 Since I’ve moved into the new house, my dog Mojo spends a lot more time indoors than he used to. This is because my ex-wife is a dog-hater who used to stomp on his tail while he was sleeping. Or she didn’t like dog hair inside the house. I forget which. The point is, Mojo now growls at anyone who weighs more than 350 pounds.

Ha ha! Just joking! My ex-wife does not weigh 350 pounds. I’m just having a little fun with her because I know she still reads my site, probably because she’s afraid I’m going to go thermonuclear on her ass and post those “special, personal videos” I have stored on the old hard drives in my office. For the record, releasing those videos would be wrong and I would never do that, at least not until I finish digitally remastering them in HD 3D IMAX technology with Dolby Surround Sound. (I’m currently working with Paramount on a distribution deal.)

Where was I? Oh yes, my dog Mojo. Now that he has access to the house whenever I’m home, I get an up close look at his home life and what it consists of. It is surprisingly varied. Most of the time, of course, he’s sleeping. When he’s not, he’s engaged in any number of healthy canine activities such as dozing, snoozing, napping, taking a siesta, catching 40 winks, or even catnapping if he’s feeling up to it. If I didn’t know better, I’d suspect him of having a secret heroin habit.

If he ever does find himself awake, he’ll sometimes launch into Maximum Play Mode. He’ll drop to the ground with his paws extended, ass high in the air, and begin to run laps around the house, jumping over every single step on the staircase, cutting a hard right into the kitchen, frantically trying to skid to a stop on the linoleum before slamming into the door to the garage head first. All this because I turned my head slightly which he misinterpreted as Time To Play! Five minutes later, he’ll be snoring loudly.

Sometimes, he’ll stand still and stare at the front door for long periods of time. I used to think that he heard a noise and is expecting someone to show up at the door, but it has happened often enough that I now know that this is nothing more than his own, doggy version of daydreaming. “Maybe a person will come to the door and bring me steak! Or a cat to play with/eat! Or maybe a bad guy will show up and Master will Need Protecting!” He’s so fixated on the door that an actual bad guy could walk in the back door, eating a steak while petting his pet cat, and Mojo would never know about it. 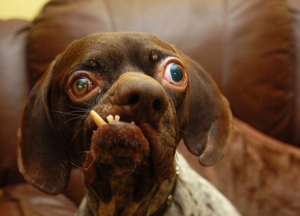 The remainder of his time is spent reminding me, his Pet Human, that he is a living organism, and occasionally needs to go to the bathroom. He accomplishes this by walking up to me and putting his head in my lap.

Mojo: (You moron. How many times do we need to go through this? Every few hours, I need to go outside to pee.)

Mojo: (Seriously, how fucking hard can it be to figure this out? I come and get you every time I need to go. I haven’t had a single accident in this house, but I’m starting to think that maybe a big ole dump on the kitchen table is the only way to get through to you.)

Me: Oh… Hey, do you need to go outside Mojo?

Mojo: (Finally. Jesus, somebody get this guy a Snausage.)

Yesterday, as I let him out during a break in the Super Bowl, I started thinking about how Mojo effectively has to ask my permission to go to the bathroom. It’s kind of degrading, now that I think about it. “No! You may not exercise your bodily functions until it is convenient for me to allow it to happen!”

Then I realized that we all do this with our kids. My kids will go all day without using the bathroom, but the second you get within seven nautical miles of a restaurant, all of a sudden it’s like Niagara Falls in their pants. My daughter was the worst at this. One time, eating at Sweet Tomatoes (a salad bar), she went to the bathroom seven times. Seven. So after a while, I started having to make judgment calls. I turned into a urinary version of Judge Wapner.

Son: But daddy, I really need to go!

Me: You went five minutes ago.

Me: I’m sorry, I’m going to have to rule in favor of the defendant on this.

Other Son: Daddy, I need to go pee!

Me: Ok, I’m holding both of you in contempt of court. 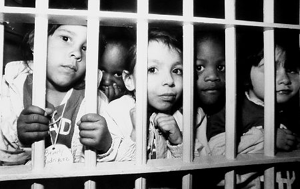 For the last time, there is a potty in your cell. Stop asking me if you can go to the fucking bathroom!

Just like that, I’ve become the arbiter of the bathroom. And it doesn’t get any better when they’ve got their bladders under control. They go through thirteen years of school where not only do you need someone else’s permission to take a leak, but you need fucking paperwork to prove it.

Hall monitor: Hold it, young man! Where are you going?

Student: The bathroom, it’s an emergency.

Hall monitor: Not without the proper form it’s not. Let’s see your bathroom pass.

Hall monitor: Hmmm… Ok, this seems to be in order.

Student: Thanks. While you were reading that, I pissed myself.

Hall monitor: You’ll need to fill out a Form 64-U/1 for that. Simply scratch out “Stabbed a teacher”, and write in “Urinated on self” instead.

Hell, sometimes it doesn’t get better even when you’re an adult. There was a small business in my hometown that everyone knew to stay away from employment-wise. This was because the owner of the business was a complete tyrant who was so afraid that his workers would stop working for one second that he installed catwalks over the office so that people with clipboards could watch you at all times. Talking to an employee about something other than work? That’s a demerit. Taking a personal phone call? Demerit. Going to the bathroom? You get three bathroom breaks a day, any more than three and that’s a demerit. Seriously, I’m not joking. And if you got more than three demerits in a month, you were fired, you goldbricking asshole. 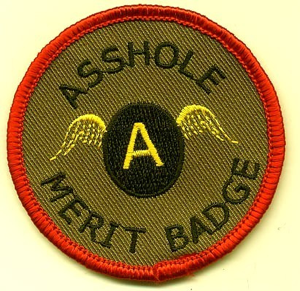 He also fired a guy for going to the hospital because his daughter had been rushed to the ER. Cause, you know, Business!

The strange thing is that we treat our excretory functions as shameful, because it sure doesn’t start that way. When my daughter first pooped in the potty, my ex-wife took a fucking picture of it which is pretty ridiculous, although to be fair, it’s not the kind of picture you can get at Glamour Shots. When our kids start using the potty, we watch them, read them books about the experience, give them “potty treats”, and generally act like they came up with the Theory of Relativity for dropping a goddamn deuce anywhere near the toilet. (Non-parents will probably not believe that last statement, but fellow parents know that at a certain age, your kid shitting on the bathroom floor is a victory. A disgusting, Pyrrhic victory, but a victory nonetheless.)

My guess is that after a certain amount of time, we can no longer take it. “Look, I’ve been cleaning up your piss and shit for four fucking years now. You’re old enough to do it yourself, so from now on, you’re on your own. I don’t want to see it, hear it, smell it, and I sure as hell am not going to clean it off the goddamn walls again. Close the fucking door and keep that shit to yourself.”

And just like that, our kids are scarred and they no longer feel free to let it fly in the middle of a parking lot, or at least they don’t until they attend college when drinking turns bodily functions into one of the funniest things in the world again. (A great friend of mine once came to visit me in college and promptly got caught by the cops peeing in my front yard, and not twenty four hours later I caught him peeing in my kitchen sink on top of the dirty dishes.)

All of which just goes to prove that… Oops. Hang on a second. Mojo is trying to tell me something. 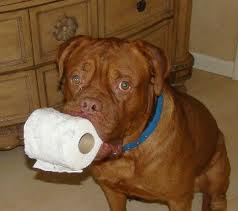