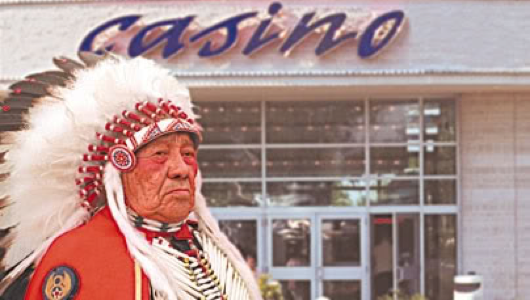 My wife and I celebrated her cousin’s birthday on Saturday night by getting totally sideways at the Talking Stick Resort which is an Indian Casino with absolutely insane rules. For instance, they let you bring whatever booze you want down to the pool, which is nice because like all Indian casinos, they charge seven bucks for a beer. But they will not let you bring a beer from your hotel room down to the casino floor, even if it is one that they sold you. Also, they stop serving alcohol at 2:00 AM, which is total bullshit from my point of view, and completely idiotic from theirs. Think of all the moronic bets you’re passing up on, Talking Stick! “Put it all on red-36. Yes, even the children!”

There were a whole bunch of other weird rules, most of which I was informed of only after I broke them: You can’t hop into the hot tub fully clothed, you can’t pretend to be the valet guy, and calling the 7 foot guy standing in the club “Lurch” is one way to get kicked out. Oh, and they don’t like it when you repeatedly greet the English bartender with increasingly bizarre phrases such as, “Right! Wot all this, then?”, “And… Bob’s your uncle, here’s a quid for the lager.”, and “I say luv, where’s the bloody WC?”

But what I remember of the evening was a lot of fun, even if casinos outside of Las Vegas are pathetic by comparison. Where are the exploding volcanos? The man-eating lions separated from your drunken, taunting ass by a half an inch of glass? Where are the women wearing outfits so revealing that you can tell that, hey, she wears a clit-ring? And the street vendors handing out free pornography? The only thing the Indian casinos have in common are slot machines, which have been put on the “ass-raping” setting, which makes every spin an almost winner, and hoovers your wallet faster than a teenage daughter at the mall. “That’s for taking our land. Fuck you.” I can’t say that I blame them. 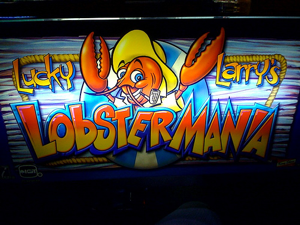 As embarrassing as it is to lose all of your money, it's twice as embarrassing to lose it all playing Lucky Larry's Lobstermania.

Dogs On Drugs has no sponsors, in large part because I like to use words such as taint-licker. But that doesn’t keep me from putting ads on the site. It ‘s Involuntary Advertising: 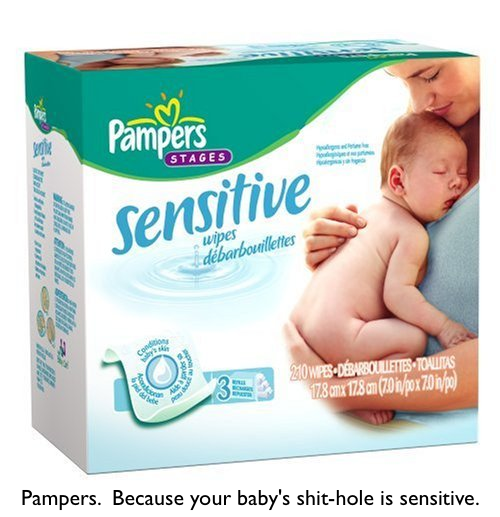 Last week’s poll results are in, and the candidate people believed is most likely to have participated in an MMF three-way is… Rick Santorum.

I disagree with these findings. First of all, Rick Santorum is so nauseatingly holy and self-righteous, I bet he showers with his clothes on for fear of seeing anything sinful. And Newt Gingrich? Sure, he may have wanted an open marriage, but can imagine anyone accepting an offer of a 3 way with Newt? Would you? I believe the words you’re looking for are “Fuck” and “No!”

Of the remaining candidates, Ron Paul is so old that he remembers the Rolling Stones’ first tour, so if he has had an MMF three-way, it would have had to have been before the invention of sex. Barack Obama seems like he’s a likely three-way kind of guy, but something tells me that he talks a much better game when it comes to his sexual prowess. “Can I give you an orgasm so intense that you black out for 45 seconds? Yes, I can!” And then he shoots his load pulling his dick out of his pants.

That leaves Mitt Romney, who has the advantages of being a good-looking guy and also being a Mormon, a religion that is just a stone’s throw away from community shagging. But no one agreed with me. You know why? Because everyone else is wrong. Wrong! The correct answer was, D. Mitt Romney. 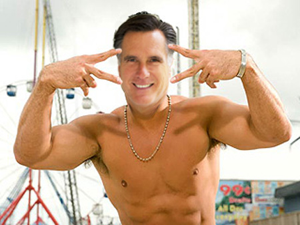 Mitt Romney: Down with "polling" the electorate, yo.

Ok, onward and upward. Have a great week, people.