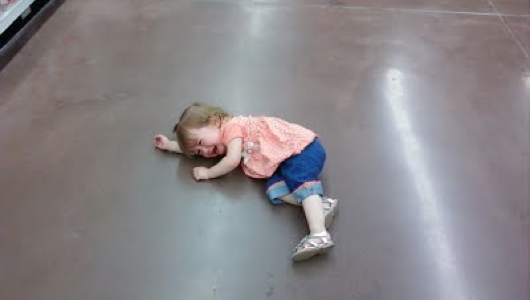 We had a rather boring Sunday at the Dogs on Drugs household today. It was raining and in the mid-40’s, and so since outdoor activities weren’t an option we decided to hit up Target for a few odds and ends, and then the grocery store. So for well over two hours, I sounded like this. “Put that down! Don’t touch! Don’t touch! You are so touching! Stop it! Come here! Get off the floor! Hands in your pockets! You are not just looking, goddamit, you are punching holes in that ground beef with your grubby little thumbs! WHAT THE FUCK IS WRONG WITH YOU? DID SOMEONE GIVE YOU GUYS FUCKING SPEED? SETTLE THE FUCK DOWN!”

I don’t know what comes over my kids when we leave the house. They can be sitting calmly at home, drawing serene tableaux of our family merrily camping in the woods one second, and the next second they are hurtling their bodies down an aisle of the grocery store as if they are trying out for the Olympic Frozen Food Luge Team. And to judge by what I saw today, my five year old son looks to be a lock. He will be standing there one minute, mangling produce, or perhaps picking his nose, and then all of a sudden he will be sliding head first, on his back, past a group of people looking at beets.

Meanwhile, my eleven year old daughter is on a mission: She’s at that awkward age where looking good is finally starting to win out over her previous look which, as far as I was ever able to tell, was that of a homeless blind girl. And so while we’re looking at waffles and cuts of meat, she’s as far away from us as is permissible by law, looking at eyeliner, mascara, foundations, and a trowel to put it on with. After she decides that she has spent enough of my money on herself, she comes back, dumps it in the cart, and happily assists my son in poking holes in food containers. 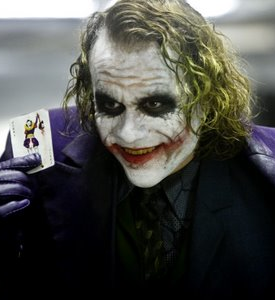 My daughter wouldn't think that this is too much makeup. She'd think it was a halfway decent start.

My three year old, on the other hand, is relatively easy to control as his little ass is confined to the cart. He’ll whine that he wants to walk, or that he needs to potty for the fourteenth time, or just whine to hear the sound of his tiny little chipmunk voice, but I control where he goes so I don’t have to worry about him as long as I keep the cart in the exact middle of the aisle because I’ve learned that he can clear a shelf of every last jar of fucking spaghetti sauce in a microsecond, (although he does take his time when laughing at the poor bastard who has to clean it up).

After all that, we pile everything in the car to go home and have this argument the whole way home.

Kids: Can we watch TV?

Parents: You watched cartoons all morning, you can go fifteen minutes without TV.

Kids: (Begin screaming and punching each other in the face)

Me: Why do we have kids, again?

Wife: I heard they take them back at the hospital, no questions asked.

Me: That’s a thought. Plus, they wax the fuck out of those hallways. Excellent luge results, I’m sure.

So in other words, it was a pretty typical day for me.

On to what you missed this week while you pointed your toes.

And now, a word from a sponsor that is about to sue us. It’s involuntary advertising: 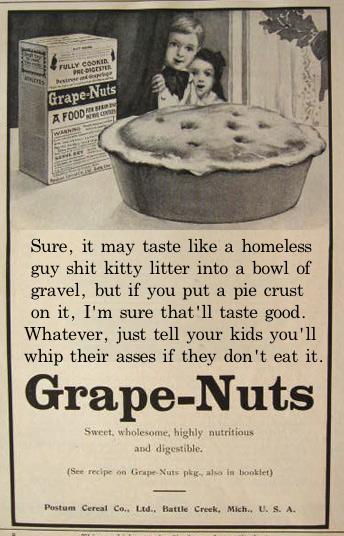 Our latest Poll of the Moment has just closed, and the results have been tabulated using a powerful supercomputer and a lot of beer. The results:

Let’s put this in perspective, shall we? More people would rather eat a human being, and a relative at that, than eat at Arby’s. This says something about Arby’s. It also says something about relatives. I’m not saying this applies to anyone I’m related to, necessarily (wink, wink), but next time you accidentally spill A1 all over yourself, you’d better be careful about who you call to come over and help you clean up.

And that’s it, on to a new week. As Bono once sang, “It’s a beautiful day! Don’t let it get away!” Of course he also once sang “I wasn’t gonna buy just anyone’s cockatoo” (really), so what the fuck does he know? But try not to let that sodden Mick get you down. Have a good week.