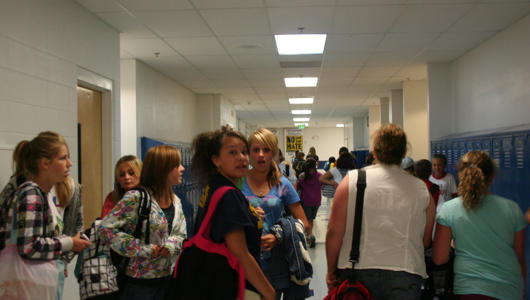 The years I spent in Junior High were the worst of my childhood. That’s relative, of course. I had a happy home life, friends, I wasn’t bullied, and I don’t have any real reason to complain. But those three years were at the bottom of the list for me. The reason is simple: Going through puberty with a couple of hundred other kids is fucking horrible. No one knows where they fit in. The unpopular kids hate the popular kids for being popular. The popular kids don’t think they’re terribly popular and hate the unpopular kids for hating them. You have to conform to current fashion (as seen by tweeners, no less) or be ostracized, yet you have to stand out in order to be recognized. In short, it’s three years of insanity with pubes.

And what I really hated about it was that the school that I went to was run like a jail. The smallest of infractions bought you a trip to the office and detention. (Warning: Back-In-My-Day moment ahead.) When I was a kid, for instance, the big thing was wearing high top sneakers with the shoelaces undone. Because, you know, that makes sense when you’re walking through really crowded halls. We must’ve liked bashing our teeth in or something, and we must’ve been good at it too because the school quickly banned untied shoes. Think about that. Walking around with untied shoes is like driving around with flat tires, and we were such morons that they had to make a rule prohibiting it.

Anyway, I decided that I liked being able to slip in and out of my high-tops, so I left them untied, but tied knots in the ends and trimmed the laces so they couldn’t be tripped over. “Greg! Tie your shoes!” I was immediately told. “But Mr. Cerny, I took my laces and…” “I don’t care, tie your shoes or go to the office!” I continued trying to explain that I understood the rule, but it shouldn’t apply to me since I had taken the danger out of the equation entirely. I was sent to the office, where I tried to explain myself further. “The rule is no untied shoes. Your shoes are untied. I’d like you to think about this during detention.” 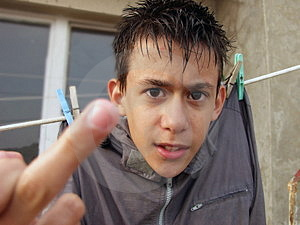 "I thought about it in detention and fuck you."

I thought about it, all right. I sat there and fucking fumed over the police state that was running the joke of a school I attended that didn’t teach me a goddamn thing other than to distrust the motives of authority figures (which, in retrospect, was a pretty important lesson). Of course now I see things from their perspective: The students are fucking maniacs with ticking time-bomb glands, ready to blow at any moment. You give them so much as the appearance of a loophole, and these kids will trample all over your ass with their untied shoes. It will be chaos.

I get it now. But that didn’t help me back then when the only good things about my school days were when the bell rang at 3:00, and when I got to see the Guidance Counselor in the halls, because she had some seriously huge tits and wore tight sweaters.

The reason I bring all of this up is because my daughter is starting 7th grade this fall, and will be going to Junior High. (Yesterday I spoke about how little changes can throw you for a loop. For me, this is one of them. Junior High was 6th, 7th, and 8th grade for me. For my wife, it was 6th, 7th, 8th, and freshman year of High School. Yeah, you read that right. Freshman year in high school was spent in Junior High. This is because she lived in Minnesota, and everything in that state is retarded.) 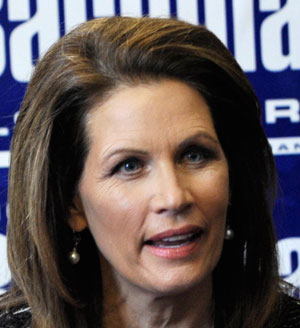 To get back to my point, my daughter will be going to Junior High in the fall, and tonight was her 7th grade orientation. This meant that I was stuck in a large room with a bunch of twelve, thirteen, and fourteen year olds. Holy shit, just looking at those pimply faces, those awkward kids, the lanky uncoordinated goofballs, the short ones desperately praying for a growth spurt, the ones who obviously hit puberty early and were mortally ashamed of the results… It all came flooding back to me, and it was not a pleasant, nostalgic feeling.

I felt like taking my daughter by the hand and walking her home, gently explaining how the next few years of her life were going to be really, really stupid. “You’ll start acting too cool for toys, but you’ll still want to play with them. You’ll want to act seriously goofy, but will have to play it cool. You’ll end up treating boys cruelly because you like them, and you’ll treat your enemies like friends so you can gather intel to stab them in the back with later. You will want to be totally independent of your parents, but you will continue to be totally dependent on them. In short, you will be insane. And because of this, I’m locking you up until that period of your life is over.”

I mean, it’s the only compassionate thing to do, right?

After I got all the kids put to bed, I sat down to write and realized that the evening had psychically jarred me so much that I had completely forgotten what I was going to write about. Usually this requires beer. So, fuck it, let’s do a mini-video blow out instead:

Our first video clip is of a deposition. It seems a man is having a problem with the City Council over a shed. Stick with this video until the end, because at the 1:05 mark, the man uses the most brilliant legal ploy I’ve ever witnessed in my life. Jaw-droppingly awesome.

Our next video demonstrates what can happen to a man when his world is turned upside down. Sure, Mr. McFeely was a nice and gentle man while he had employment in Mr. Rogers’ Neighborhood, but once Mr. Rogers was gone, he fell to pieces. He is currently touring the country, scaring four year olds with day-glo animals:

We leave you with a plug from one of our many excellent labor unions, who provide quality goods and courteous services, like pushing around little old ladies from Florida.