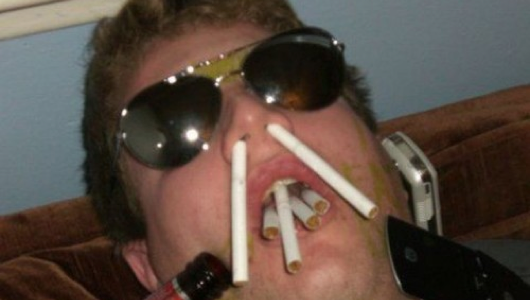 If you’ve ever bellied up to the bar and really tied one on, you know that one of the most terrifying things you can ever do is pass out in front of your friends. This is because your friends are drunken reprobates, and also because the urge to fuck with someone who has passed out is almost overwhelming, especially when that person was acting like a total jackhole just fifteen minutes earlier. Oh, you say you have the world’s biggest cock? All right, then let’s just burn your pants in the street so everyone at the bar can confirm your claim. What’s that? You’re not objecting? Ok, then, here we go!

When I was in college, my friends and I used to refer to the act of messing with someone who had passed out as “desecrating a corpse”. This led to some unfortunate misunderstandings. “Greg? Yeah, I saw him about ten minutes ago out back, desecrating a corpse.” It was like an episode of Three’s Company on ether sometimes.

The key to this pastime is to not overdo it. If you do it on a regular basis, everyone quickly learns to pass out behind closed and heavily locked doors. Lord knows I did, and so did my roommates that were smart. We mainly preyed on the occasional party goer that overstayed his welcome, and every so often on one of our own.

For instance, I have a friend from my home town that I’ll call Mitch. Mitch came to visit me on numerous occasions while I was at college, and we always had fun until Mitch would overdo it and pass out at some totally wussy hour like 2:00 AM. I let his behavior slide a few times, but I finally had to warn him. “Mitch, take it easy. I swear to God, if you’re the first one to pass out tonight, we’re going to fuck with you.” 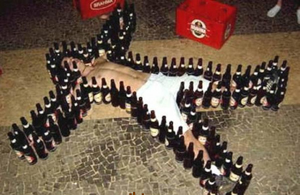 "Look at it this way: If he dies of alcohol poisoning, we've saved the police some chalk!"

And of course, Mitch was out by midnight after drinking an entire tray of kamikaze shots (!?!) on a dare. We took it easy on him that night, merely scribbling all over his face with a permanent paint marker. When he saw his reflection in the bathroom the next morning, he shouted out “You guys are assholes!” and we all had a good laugh. Forty minutes later, he came out of the shower, face red from scrubbing, and as he was walking out the door looked over at me and said, “I’m going to grab some food at IHOP. You want to go?” From that angle I could see that he had totally missed the large dick drawn on the side of his neck which was ejaculating into his ear. “Nope, I’m good. You have fun.” Ninety minutes later he came walking in with a hand over his neck, “Fuck you guys! Fuck YOU!”

The next time Mitch came to visit, we got more aggressive. This time he managed to pass out on a couch in a room of thirty people who were drinking, getting stoned, and the perfect audience for a gag we came to call The Mummy. We took strips of newspaper, soaked them in beer, and paper mâché’d his head. I kept thinking to myself, “He’s got to wake up, no one can sleep through this,” but Mitch was fucking O-U-T.

After we’d covered his head (we left him a mouth slit, put pencils in his nose to give him breathing holes there, and everything else got covered, but only after filling his one ear with barbecue sauce), we dried it with a blow drier until it was hard. At this point, the entire room was practically pissing their pants with laughter, but it got even better. After whacking him on the head with a whisk broom failed to wake him, we simply lifted the couch three feet off the ground and dropped it. What resulted was a very passable Mummy impersonation, with confused and agonized cries, staggering, and a great deal of clawing at the face. 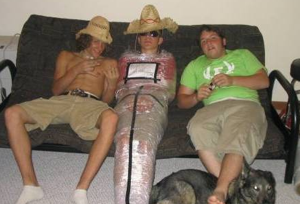 Here we have the rare Mexican Sombrero Mummy, only seen on Cinco de Mayo after ingesting tequila in Big Gulp containers.

Mitch, however, had it easy compared to the brutal desecration I laid on a hated neighbor on the floor of my dorm. This guy (the carpet-padding douche from this post) made consecutive mistakes that led directly to his downfall. First of all, he was a complete cock-knocker, and a repeat offender at that. Second of all, he made the mistake of passing out in the student lounge one night. We stripped him naked, duct-taped his body from neck to ankles (leaving a gap for his junk), and carried his drunken ass into the basement where we transported him over to the women’s dorm. My girlfriend let us in, and we put this guy in one elevator and pressed every floor (twelve total). We then got the other elevator in the basement and pulled the alarm. And right before the doors shut and he began his ride, we splashed him with some cold water and woke him up.

As a result, the women of each floor awoke to an alarm and milled about wondering what the problem was. Then an elevator door would open right before them, and a heavily duct-taped drunk guy with his dick hanging out would say, “Stop the elevator! Please! Or get me a towel!” before the door would close and he would have to try his luck with the ladies on the next floor. He made it all the way to the top before someone covered him with a blanket and cut loose his arms and legs with a pair of scissors. Surprisingly, no one felt the need to ask any questions, which was fine in my book since I’m sure that violated more than a couple of laws.

Part of me is glad that those days are well behind me, but another part of me wants another crack at it. Kids these days do shit like pop oxy’s while they’re drinking. I could do almost anything to them! “Matt, can you explain why you were sleeping in your waterbed at the end of the runway?” As it is, the only time I’m really tempted is when I go on the rare drinking holiday with my wife and friends. I always ask at the front desk, “Where are your elevators?” 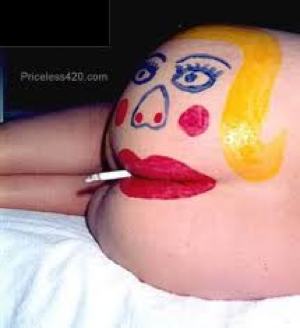 "Also, can you have the concierge send some paint up to my room?"