It’s April, so in most of the United States, snow is done for the winter. Not Chicago, though. I grew up in Chicago, and April is the month when Mother Nature likes to fuck with your head. “It’s 80 out! Isn’t it beautiful? Go ahead, take the snow tires off of your car! Start getting your lawn ready! Spring is here and Summer is on the way! … … … MUWAHAHAHA!!! 18 inches of snow, TAKE THAT YOU STUPID FUCKING HUMANS!” Every fucking year.

I grew up loving snow. I loved the look of a fresh blanket of pure white snow covering the world in the morning, the soft crunch of snow under my boots, the fun of building a snowman, or sledding down a hill… Even when my father figured out that I weighed more than a shovelful of snow and set me to clear the driveway, I still loved snow. And I miss it now that I live in the desert.

There are only two things about snow I don’t like. The first is how when you’re a kid you decide you are going to build the snow fort to end all snow forts, a solid white Fort Knox, you get all bundled up, race outside, pick a good spot and… dry snow. Dry, unworkable snow. Fuck you, dry snow, you are USELESS to me!

The other thing I don’t like about snow is all this pussy falling down in delicate little flakes bullshit. That is not how it should work. If the forecast calls for two feet of snow, that’s what you should get. You should be standing there, talking to your neighbor, saying “I heard we were looking at getting two feet…” when all of a sudden… KA-WHOMP! TWO MOTHERFUCKING FEET OF SNOW, BITCHES! All at once, just WHAMMO! How awesome would that be? I would sit in my car near a playground just to see kids get clobbered by a decent snowfall. 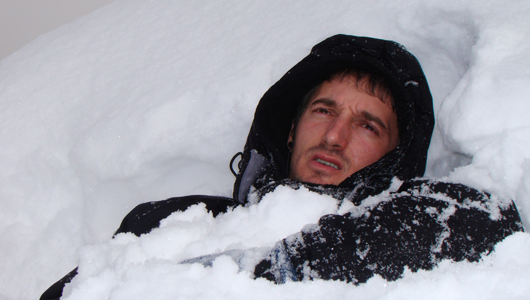 But other than those two things, I still really love snow. People whine about it a lot, though. “It’s makes it really tough to drive!” If by “tough” you mean “insanely fun”, then I agree. I remember a friend picking me up on his way to a liquor store so that we could go to a party at his place. We’d just had six inches of snow, the snowplows hadn’t come out our way yet, he had bald tires, and he was on mushrooms. That drive wasn’t tough at all, it was a fucking BLAST! At no point was the nose of the car ever pointing in the direction in which we were traveling. It was like a grown up version of the Tilt-O-Whirl, only you could smoke in it.

There are a lot of other cool things about snow:

And that last sentence pretty much sums up snow for me. Any kind of idiocy is made that much more fun by the presence of snow. I miss snow, and I hope to live in a place where snow is a lot more common than it is here in the desert. Just not in an ice cave, because I can’t build those for shit.