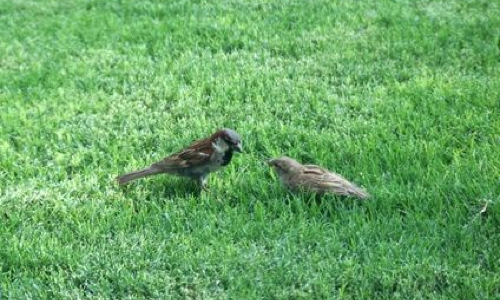 I often take a walk around the building at work after lunch. I’m one of those types of people that likes to walk while I think even though it’s the kind of thing that evolution is sure to stamp out pretty soon. One minute you’re deep in thought and think you’ve finally figured out the cure for ass cancer, the next minute you’re plastered to the grill of a Cadillac driven by an eighty year old who is late for bingo. Mental acuity and cardiovascular fitness don’t mean shit if you’re too stupid to watch where you’re going.

So I try to keep my head up while I walk, not only to keep an eye on the constant stream of runaway Caddies with seniors behind the wheel in Phoenix, but also because you tend to look like a complete moron when you walk directly into a stop sign, something I’ve done on more than one occasion. And it was while keeping an eye out during a walk today that I noticed something funny: A facilities worker in my building was walking down the sidewalk when she noticed two birds on the grass. She began waving her arms at the birds while shouting “Shoo! Shoo, birds!”

This display represented a comprehensive failure to understand not only avian behavior, but behavior in general. I mean, does she really think these birds will leave and never come back?

Bird #1: Hey, let’s look for worms in that patch of grass over there!

Bird #2: Hold on, Frank. You remember that Hispanic lady with flabby arms and a large overbite? She didn’t look too happy when we tried that yesterday. 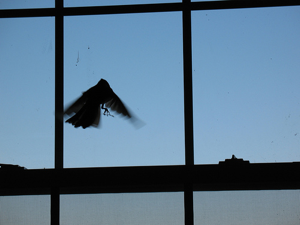 This, of course, is never going to happen. Well, the shooing part won’t happen. Birds will continue to fly into windows because birds are fucking morons. When I lived in Tucson, I used to go hunting for doves with a friend of mine. These aren’t the white doves that people release at weddings, they’re brown with white-tipped wings, and they are as stupid as a bucket of dicks. We’d walk up to a flock of them pecking at gravel on a rural path and since you’re not allowed to shoot them on the ground, we’d release a shotgun blast in the air to spook them.

They’d take off in alarm and fly off in a giant circular arc which would ultimately lead them back to us because they’re so fucking stupid that they will forget in less than fifteen seconds that two guys with shotguns just tried to kill them. They’d practically fly down our barrels before a couple more blasts would spook them again, setting off the same chain of events. You could literally bag the limit of doves in less than two minutes*.

So if a bird will forget an assassination attempt in the time it takes you to read this sentence, what are the odds that a heavily accented “Shoo birds!” will do the trick? Absolutely zero. In fact, shooing anything hardly ever works as you can see by the following experiment that I conducted with the help of a zookeeper I’m blackmailing and beer: 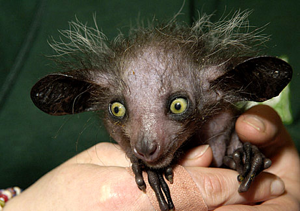 Also not shooing: Whatever the fuck this thing is. And it tasted as bad as it looked, too.

On to the week you missed while you were wondering if anyone would notice if you just let that tiger run free.

Let’s have some fun with videos. A long time ago, I ran across the following video, which for whatever reason makes me laugh harder the more I watch it. (I’m pretty sure I’ve posted this before, but if you haven’t seen it, enjoy.)

If this video pops up, I’m no good for anything for at least 30 minutes. It’s an oldie but a goodie. After the Haitian earthquake that killed hundreds of thousands, a rumor popped up that Arthur had died in the disaster, which happily seems to be false. But if he had, what a legacy, huh? I would love to go down in history as the guy with the awesome laugh. Instead, I’ll go down in history as the guy who failed to get Foreigner to make him a Rueben sandwich. If I’m lucky.

Anyway, this morning I ran across another video with the same property: The more I watched it, the harder I laughed:

Heh, I just watched it again another five times, and it’s even funnier than it was this morning, or this afternoon when it had my daughter in stitches. The absolute best part of the video has to be these lines:

Where’s my buffalooooo, when I need him?
Oh he’s got problems of his own, I understand
Hey guy with a buffalooooo
You’re gonna have to just punch that cougar in the face

Now that I think about it, that last line is a perfect phrase for the office. No matter what situation pops up, if you use that line people will pretend to know what you’re talking about so that they don’t seem stupid.

Boss: Sigh… Greg, we’re $500,000 over budget for hardware and have to get rid of some servers. Any suggestions?

Greg: Well, I think you’re gonna have to just punch that cougar in the face, aren’t you?

Boss: You mean get rid of the R & D media server?

Greg: Sure, why not?

I’m totally going to use that tomorrow.

Ok, it’s a new week. Treat it gently because once you drive it off the lot, it loses 40% of its value.

* For those of you in the anti-hunting crowd, please note that I have always followed one rule when hunting: Only hunt for something if you’re going to eat it. And, yeah, we ate the stupid doves. So I don’t want to get a bunch of cry-baby comments about how I’m a monster because I blew fucking Tweety Bird up for kicks. I didn’t. I blew Tweety Bird up for kicks, then I ate him. Huge difference.