And The Winner Is… IKEA, By A Nose! 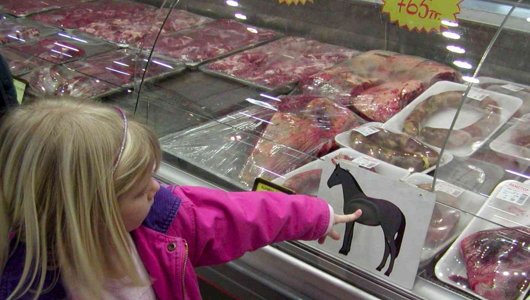 I’ve been reading with no small amount of amusement recent reports that IKEA has been serving its customers meatballs tainted with horse meat. This makes me laugh not because I hate horses or anything, but because (and I can’t stress this enough) IKEA is a fucking furniture store, people. You should just be glad that you’re eating something that used to be a carbon-based life form. I had always assumed that anything for sale in the IKEA cafeteria was made out of excess polyurethane foam padding. Not that I particularly cared. “Yes, can I have some more of the “meat” balls, oh and some of that Bundt cake too? Yeah, the Bundt cake, over there. The one with the label that says ‘Do not remove under penalty of law’.”

Another thing that made me laugh was how quick IKEA was to point out that the horsey-balls were not sold in the United States, only in Europe. This is because IKEA is a European company, and they know that Europeans could give a fuck if there are horse parts in their food. Germans will eat almost anything once it’s been converted to sausage form or pounded flat with a hammer: Puppyschnitzel, Raccoonschnitzel, Boyscoutschnitzel… It all tastes the same after a couple of giant steins of Löwenbräu. (If you confront a German about this, he’ll shrug his shoulders indifferently and say, “Meh. We’ve done worse.”)

The French eat snails because, fuck you, that’s why! To question the French about their culinary habits is to risk a Snottiness Apocalypse (a Snotpocalypse). The English eat things that I’m not sure even qualify as food, such as Spotted Dick, which I was surprised to learn was not something Russell Crowe once went to see the doctor about. Pick any European country at random, and you’ll find they eat shit way worse than horses as a matter of habit. Take Norway. They eat something called lutefisk, which is made of whitefish and lye. (I don’t know if all Norwegians are like the ones I’ve had the misfortune to know, but if they are, I’m all for feeding them a diet consisting of fish and poison.)

IKEA knows that if you were to approach a European shopping at their store and tell them that they were about to eat horse meat, their reaction would be, “Yes? … And?” (If it was in a socialist country, they might also ask how many paid days off of work they just earned.)

I personally think that the problem isn’t that IKEA has been serving horse meat, its that they haven’t been doing it enough. Have you ever been to IKEA? It’s kind of fucking bland. Not that I have a problem with bland furniture. I was born in 1969, and so I lived through the 70’s, which was a period in time that witnessed more poor furniture and decor buying decisions than any other period in the history of mankind. Yeah, that mustard colored shag carpet is a brilliant idea, and that naugahyde chair shaped like a human hand? That just screams class. Why don’t you just feed your kids pure, uncut cocaine straight from a disco ball while you’re at it? 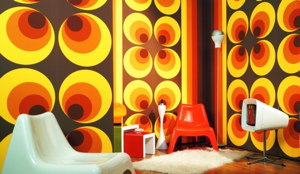 Hard to believe this could ever go out of style, isn’t it?

So I don’t have a problem with functional and unassuming furniture. It’s just that IKEA could do with a bit of pizzaz, a splash of mystery, maybe an element of danger. Serving mystery meat would be a great start. They should strategically place subtle clues in the cafeteria, like saddles, bridles, or maybe even circus paraphernalia. (“This isn’t Spotted Dick! This is a giraffe!”)

The store itself could use a little unpredictability too. It’s way, way too functional as it is. You go from living room furniture, to bedroom furniture to kitchen furniture, to office furniture, and… yawn… Can we go back to bedroom furniture, because this store is fucking putting me to sleep! Mix in some surprises, IKEA! For instance, right after the children’s room display, maybe you could show everyone what an authentic Swedish sex dungeon looks like. Who wouldn’t admire your economic pine sex swings and functional ass spreaders? Everyone would enjoy that!

You could also use the opportunity to show the world some of your authentic Swedish traditions. For instance, what better way to demonstrate what those long, suicide-filled winter nights in Sweden are like than to lock an IKEA employee in one of your patented tiny IKEA store apartments with an endless supply of vodka and sadness?

Better yet, you could force IKEA employees to dress, act, and sound like the Swedish Chef at all times. I would fucking never leave IKEA if you did that.

Getting back to the horse meat thing, I don’t think that eating horse meat is that big of a deal, actually. There are those that would tell you that there’s really no difference between a horse and, say, a cow. But that’s clearly bullshit. You’d look like a real asshole trying to win the Kentucky Derby on a fucking cow. They are, however, close enough that I don’t think it’s a horrible crime against nature to eat a horse if you had to.

Far more disturbing is the fact that somehow horse meat was accidentally introduced to IKEA meatballs. If IKEA was caught red-handed jamming Secretariat into a meat grinder, at least that’s something you feel like you could control. The fact that IKEA accidentally did so is kind of horrifying. What is the fucking process you use to create meatballs, IKEA?

Still, that alone will keep me on my toes the next time I’m there. That pine-laminated particle board dresser may not have pieces of the Sistine Chapel in it, but then again, it just might!