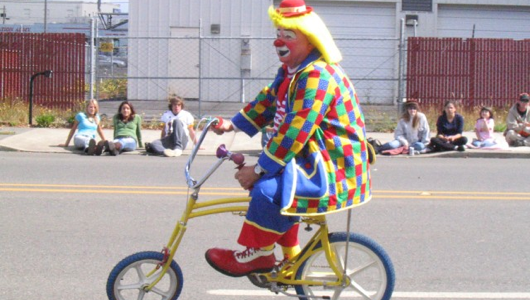 I was stretching my legs today at lunchtime when I saw what I can only describe as a gaggle of bicyclists: A collection of Lance Armstrong wannabes wearing spandex shorts so colorful that blind people were shielding their eyes, flying down the road, blowing off stop signs, cutting off cars, and otherwise acting like a bunch of fucking assholes. These are the pricks that will lecture people that they need to “share the road” with bicyclists, then get on that road and ignore every traffic law known to mankind. God, how I wish I drove a steamroller to work.

First of all, let’s get something straight, fellas: You are not Lance Armstrong. Oh, sure, you’ve got the asshole aspect of it down pat, but that’s where the resemblance ends. Lance Armstrong got to bang Sheryl Crow after winning a race, whereas you go back to the office and jerk it in a bathroom stall before calling a meeting to discuss some idiotic, buzzword-laden topic like “Leveraging Synergy to Increase Value-Adds” while your coworkers mentally imagine themselves smashing your kneecaps with a hammer.

Also, Lance Armstrong wore tight clothing because he was involved in actual races against the best (read: most doped up) competition in the world, and minute increases in drag could mean the difference between winning and losing a race. You wear spandex bike shorts because you believe that people want to check out your junk. They don’t. They want to see you pinned to the asphalt by a fucking semi-trailer.

And another thing: I notice that when you ride in a pack you’re more likely to violate traffic laws. Here’s a news flash for you, asshole: I can take out the whole group of you just as easily as any single one of you. When you dart in front of a speeding vehicle, the only thing keeping that vehicle from running the whole lot of you down is the driver’s unwillingness to scuff their paint job. Well, guess what? I drive a Jeep and have three kids: I could give a flying fuck about my paint job, and there are many others out there who are just like me. Those guys who drive giant 4×4’s that are covered in mud? Yeah, you probably want to stay away from them.

When I lived in Tucson, there was a group of you assholes who used to ride every morning. They generated so many complaints that the police set up a video camera to catch them in action. They recorded an almost uncountable number of traffic violations, and even caught some of these fuckwits pissing in people’s front yards. So the next day they set up a fake detour and forced the riders into an area that was fenced off, then arrested the whole lot of them. This was shown on the local news that night, and the reaction was unanimous: People thought this was the best thing ever.

Stop acting like brightly colored assholes in public, and I will remember to use the brake, and not the accelerator the next time I see a 40-something year old balding accountant trying to recapture his lost youth and testosterone in the middle of the goddamn road dressed in a fluorescent fuchsia unitard.