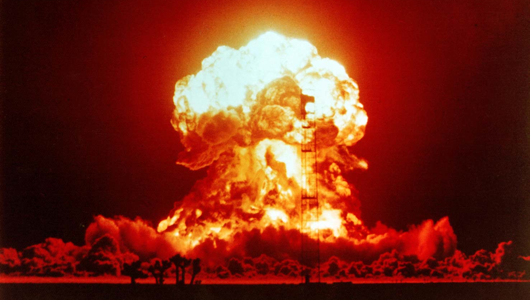 I was recently reading a book about the safety of our nuclear arsenal because… Well, honestly, it’s because in a lot of ways, I haven’t really gotten past the stage in my life in which explosions = awesome. I still have a hard time showing restraint when it comes to lighting birthday cakes and campfires, and just forget about asking me to ignite a charcoal grill using anything less than 3 gallons of napalm. Naturally, I live in the hottest and driest state in the country, so it’s just a matter of time before a mishap ensures that this blog is written entirely via prison notes smuggled out in someone’s anal cavity. But until that happens I’m free to do as I please, even if that involves testing out home made incendiary devices next to an orphanage.

Back to the book I was reading: A particular passage caught my attention because it was just plain funny. People that are younger than me (which according to my kids is everyone) may not remember this, but our armed forces didn’t always have the swagger that they do today. They weren’t always seen as a professional fighting force capable of taking on any and all comers, excelling in the deployment of advanced technology and thriving on adverse, and often times challenging conditions. No, back in the late 1970’s, our armed forces were seen as something else entirely: Potheads.

Now I’m sure that many in the armed forces were in fact, sober and professional people who did not let drugs get in the way of the task at hand: namely, to forcibly separate people from their limbs. But quite a lot of people in the military were getting really high, as illustrated by the fact that Homestead Air Force Base in Florida was once drug tested, and it turned out that half of the people on the base had been smoking pot. Now, 50% of an air force base is a lot of people, but it’s why they were drug tested that I found funny. A fully armed, Russian MIG-27 flown by a Cuban defector was allowed to land at the base without any sort of challenge whatsoever. And it landed on the runway next to Air Force One.

I’ve been plenty high in my day (I still get Christmas cards from the company that makes Zig Zags), but this strikes me as hilariously high. You’ve got to be higher than Jesus to work at an Air Force base and let that kind of shit happen. 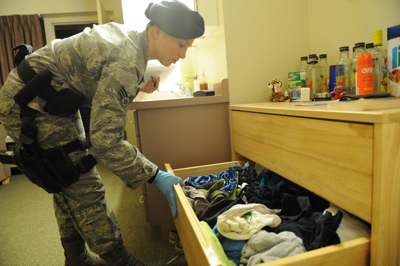 Let’s see… Stuffed tiger, Deep Woods Off, some rum, Life cereal, Hawaiian shorts, a kilo and a half of high grade, Afghani Black hash… Well, everything seems in order here!

Tower Control: Uhhh, unidentified aircraft brimming with powerful explosives, you are clear to land on runway niner, right next to the President. Have a nice day.

Tower Control: What’s that? A cargo plane full of HIV-infected circus animals on mescaline? Please proceed to runway alpha, and put it down right next to the base day care.

I was friends with a guy who briefly served in the Army during the Cold War. He was stationed on the East/West German border, and his job was to basically scream “They’re coming!” before Russian soldiers were unclogging him from their tank treads. He and his friends dealt with this by smoking as much hash as they could possibly get their hands on.

Me: So you guys smoked a lot of hash?

Me: While you were on duty.

Me: Yards away from the Communist Bloc.

Me: And no one cared?

Troy: Well it was really fun, actually. They’ve got great hash in Europe, and we’d fuck around in the woods, have snowball fights…

Troy: Yeah, there wasn’t a lot going on out there in the woods. Sometimes we’d just leave.

Troy: One of us would, yeah.

Me: Isn’t that desertion? Don’t they shoot you for shit like that?

Troy: Well, if you want to get technical about it, yeah. One time I left because I had tickets to a Pink Floyd show in Berlin…

I’m sure he fit right in.

It’s easy to forget that the people that we hand big motherfucking guns to are often teenagers, and like teenagers everywhere, a certain percentage of them like to get high, attend rock concerts, and do shit like throw snowballs at East German soldiers who are furtively jerking it to Play-Fraulein in their border-shack a few yards away.

Considering how tense things were between the superpowers back then, it’s terrifying to think that a global thermonuclear exchange could have started because of a border skirmish caused by a bunch of high teenagers. “He’s an asshole!” doesn’t seem like much of an excuse to torch the entire planet.

This is the kind of stuff I’ll be thinking about this weekend when I take my kids to the Titan Missile Museum. I’ll be in the underground control complex, thinking to myself, “Oh, I bet they totally got high in that room!”

My boys, on the other hand, will be thinking, “I bet this rocket could make some HUGE explosions!” Luckily, there will be military personnel there to answer their questions.

“How big were the explosions? Well, you should probably ask your dad about that. He’s the expert. Say, do you kids have any chips?”