Up, Up And Away In My Beautiful Balloon! 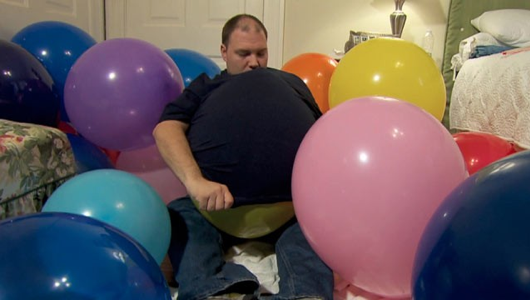 I had a wonderful Thanksgiving weekend and over the course of it I discovered many things to be thankful for, the most important being my children. I had a wonderful time with them, and even though my days were incredibly busy, I got to relax each night, surfing the web as they slept soundly, dreaming of damaging major appliances before they’re fully paid for. Surfing the web, incidentally, is even more enjoyable now that I classify it as “job-related research” for tax purposes. Getting a $7 million tax refund may not be common, or even legal, but it’s certainly a hell of a lot more fun than being law-abiding.

It was during the course of this tax-deductible research that I discovered something else that I’m thankful for: The fact that I don’t have a crippling sexual fetish that torpedoes any chance I have of leading a somewhat normal life. I’m talking about the kind of thing that, if it were to leak out, would instantly turn someone into a richly deserving social pariah. But luckily, the mild kinks that I do have are very run-of-the-mill, ordinary things that we can all relate to. I find certain types of lingerie arousing, I’m particularly fond of a few sexual positions, and I furiously jerk it every time I see a grapefruit. See? I’m hopelessly normal, even if I am banned from the produce section for life.

What I’m not, is a balloon fetishist with an inscrutable desire to do God-knows-what inside of a balloon. Like this guy:

I absolutely LOVE this video for a variety of reasons. First of all, I love the fact that he looks exactly like a substitute gym teacher I had in high school. His name was Mr. Sinise, but everyone called him Sinus. Not Mr. Sinus, mind you. That would denote a modicum of respect. No, every called him Sinus, as in, “Hey, Sinus! Catch!”, and then they’d fling a dodgeball at his head, knocking him senseless. After a few minutes of this, Sinus would retreat to the corner of the gym, hiding behind the bleachers, and kids would still go after him.

I felt bad for the guy, actually. He cowered in the corner with a look on his face that said, “I’m not sure how, when, or why, but at some point I failed in an unknown yet fundamental way, and now it is my lot in life to be tormented by 14 year old boys.” Yet every time he filled in for the regular, and presumably hung over gym teacher, he had us play dodgeball. Maybe his fetish was concussion-related brain damage.

One summer I was in the mall when I ran across Sinus working in Foot Locker. This might have seemed a step up for Sinus, but something about those uniforms made me somehow feel worse for him. The vertical stripes of the referee made him look less like an official, and more of a prisoner, doomed to serve out his sentence in full view of his tormentors. “Hey, Sinus!” yelled a teenage coworker, who then flung a high-top at him. Poor bastard.

But one look at Sinus, and you just knew he was into some freaky fucking shit on his own time (or at least he was when his mom left the house to play bridge). I would have guessed that he was into something more mundane such as going to rough biker bars dressed as Little Bo Peep, but if I had heard that he had a weird thing for balloons, I would hardly have been surprised. “Hey, did you hear about Sinus?” I can imagine a classmate saying. “They found him suffocated inside a large balloon with a blonde wig on and a lollipop up his ass.” 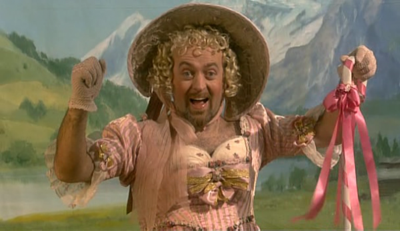 Still, the Bo Peep thing would make more sense. After all, it wouldn’t be the first time he’d have had balls repeatedly slammed against his face.

Another wonderful part of this video is that his running commentary is full-blown, gold-plated awesomeness. “That’s the last thing I need now!” You know what pal? I’d agree with that statement. After all, it’s not like anything else has been going right for you. Literally the last thing that could go wrong in your life would be for your balloon to deflate as fast as your fading hopes of achieving balloongasm.

Another great line is, “Oh, great! I’m becoming trapped in the balloon!” Like this is some sort of unexpected turn of events that not even Nobel laureates in physics could have foreseen. “Oh no! I tried to get inside a balloon, and now I’m… inside a balloon!” Duh. I’d like to see some of his other exploits.

Another gem of wisdom: “Drat! Ohhhh… I hate this.” You know how to tell when your life has gone dangerously off the rails? When you do something as clinically retarded as stuff yourself into a balloon and it’s just another in a long string of balloon-stuffing failures. “Oh, I hate when I get stuck in a giant South American-made balloon in the middle of my mom’s house!” Yeah, that’s always a drag, isn’t it? 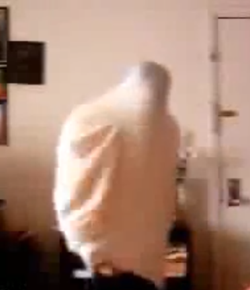 But I really lost it when he said, “This is why I need a spotter.” You know why you really need a spotter, pal? Because if you actually found another living human being willing to help you pursue personal pleasure, you’d be too occupied with sex to be thinking of fucking balloons. I mean, what the fuck? Were your parents goddamn circus clowns or something? I’m trying to understand, here.

I also love how this video flagrantly violates what would seemingly be the first rule of videotaping: If the video makes you look like the type of sub-literate mouth-breather who has trouble operating a fucking Happy Meal, you should probably destroy that video. And if you do decide to keep it for some odd reason (maybe to prove that you’re unfit to stand trial later on in life), don’t fucking publish it on Youtube. Have you no shame? Did this video becoming public somehow enhance your life? Ok, maybe if you live in a group home for mentally defective members of the von Hindenburg family, but barring that I’ve got to think that your best course of action would have been to keep this shit on the down-low.

But fetishes are very weird, and very powerful things (especially if those grapefruit were just begging for it). Take the case of apotemnophilia, which is a condition where you get off on having limbs amputated, or at least you do until you belatedly realize how hard it is to self-administer orgasms with no arms. But seriously, people get off on that. Let’s read what Wikipedia has to say on the subject:

Really? The most powerful and advanced invention in the history of mankind, and you’re using it to look up apotemnophilia? You are either a sick fuck or are terminally bored. Either way, you should turn off your computer and go do something normal, like stuff your bloated ass into a balloon. Pervert.

(Wikipedia gets pretty sarcastic and jaded when they’re in the middle of their fund-raising season.)

But Mr. Substitue Gym Teacher probably sees nothing wrong with his video. In fact, he’s probably proud of it. Little does he know that he is mocked and scorned by normal people like me. 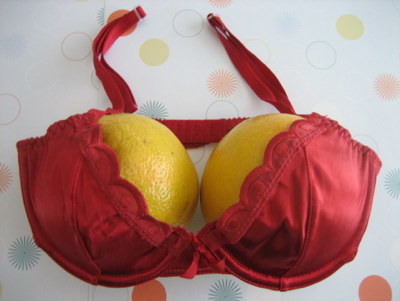