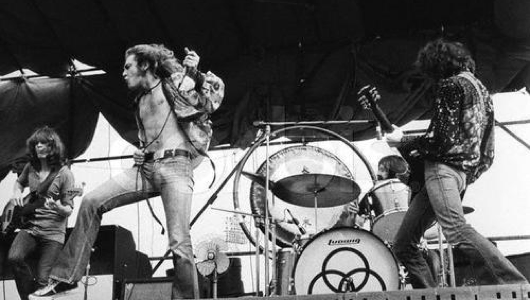 A coworker asked me this morning if I had seen the Grammy’s last night. The answer, of course, was no. I had better things to do, like shave my balls with a cheese grater. Why the fuck would I watch the Grammy’s? If I wanted to watch a group of sub-literates perform a mass reach-around in public, I’d go to the monkey house at the fucking zoo. “Well, Led Zeppelin won the Grammy for best rock album.” And what do you know? They did.

This is what is known in music circles as “Making Up For Being A Bunch Of Fucking Morons”, because while Led Zeppelin were all-conquering rock gods in the 70’s, they’d been entirely ignored by the Grammys. “Yeah, I guess Stairway to Heaven was pretty good. But we felt that the Theme from Shaft was a greater musical achievement.” Dumb fucks. So of course, when the opportunity arose to belatedly bestow some Grammy love on Led Zeppelin, they took the chance.

Grammy Guy #1: Hey, remember when we completely missed the biggest band in the world for an entire decade back in the 70’s?

Grammy Guy #1: I know, right? I mean who the fuck is Led Zeppelin? But apparently they sold over 300 million albums worldwide, and we totally missed them.

Grammy Guy #2: Wait, you’re not talking about Herman’s Hermits, are you? I liked those guys!

Grammy Guy #1: No, no, no, Led Zeppelin. And I guess they were huge. So much so, that people make fun of us for not even nominating them for a whole bunch of songs they wrote. Like something called Stairway to Heaven, which is the most popular rock song of all time.

Grammy Guy #1: Yeah, well, people are calling us clueless, tone-deaf morons for not knowing about them. The other day, my teenage son called me a dick-licker. So this year, if they’re up for a Grammy, they fucking win. I don’t care if they didn’t release anything, if they farted musically, they get a Grammy.

Grammy Guy #2: Ok, I’ll vote for this Clem Zeppelin fellow, but only if I get a job backstage as Pink’s nipple-fluffer. 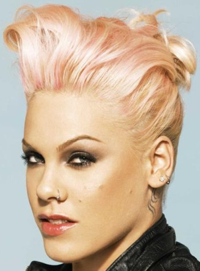 That’s a dangerous job, incidentally. If you’re not careful, she’ll put your fucking eyes out.

And that is how Led Zeppelin, disbanded since 1980, won the 2014 award for best rock album, for the 2012 release of Celebration Day, which was a live album recorded in 2007, consisting of songs written and released 30 – 40 years beforehand. Got that? Well, rock and roll purists did, and they positively howled with outrage. “This isn’t right! It’s a live album! And it was recorded 7 years ago! The songs are 3 or 4 decades old!”

When reached for comment, Led Zeppelin responded, “What’s that? Sorry, you’ll have to speak up. We can’t hear you because we’re too busy swimming in oceans of poon-tang!”

(Seriously, I cannot emphasize this enough: Led Zeppelin is constantly awash in high quality, top-shelf trim. Those guys will be getting laid 20 years after they die.)

Since Led Zeppelin is busy performing 14th degree double-blackbelt sex moves on supermodels, I’ll have to respond for them:

To All The People Who Have A Problem With Led Zeppelin Winning A Grammy For Best Rock Album:

Yeah, we won a Grammy. Who else were you going to give it to? Nickleback? We’ve taken shits, honest-to-God shits that could outplay Nickleback. They looked and smelled better than Nickelback too. Fuck Nickleback.

And fuck you for begrudging us a little success. We ruled the world of rock and roll so completely that when we decided to do one last show in 2007, we didn’t even practice. In fact, we took a bunch of buffalo paralyzers before we went on stage, because rock is so fucking weak these days that if we had played at anything close to our true capability, we would have ripped a hole in the space-time continuum, and then Al Gore and his band of raving pussies would be all over us for fucking up the environment and shit. And we can’t fucking stand Al Gore, or that giant pole up his ass.

So we mailed it in. At one point we may have even engaged in a little barbershop quartet, but again, we were pretty high so we don’t know. But what we do know is that performance, which was a total afterthought for us, was good enough to win a Grammy. Yeah, we won a fucking Grammy, and you can just sit there and fucking like it, you bunch of ass-spelunkers.

Classy guys, Led Zeppelin. But I’d go as far as saying that in this case, they were too modest. Especially the part about their shits outplaying Nickelback.