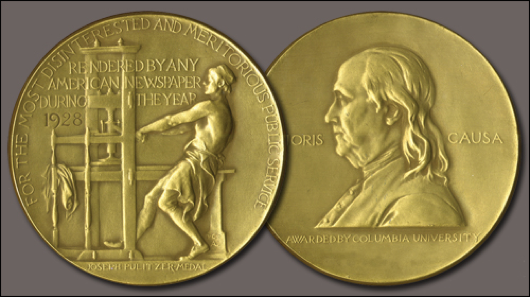 I have been the recipient of many awards in my life. I was voted most likely to get involved in an alcohol-fueled high speed chase involving the police when I was in high school, for example. I once came in 3rd in a pussy eating contest in Peru (those cats were delicious!), and I don’t think anyone involved will ever forget the time that I crashed the Special Olympics and kicked some major fucking ass in the boxing competition. They said that everybody got a trophy, but at the end of the day I was the only one who didn’t have to eat pudding through a straw, so you tell me who won.

But I may have outdone myself this time. In fact, I believe that I may very well be awarded the Pulitzer Prize for journalism for writing this post. (And if those fucking crybabies that judge the Pulitzers ever want to see their kids alive again, now they know what needs to be done.)

I’m speaking of course, of the brilliant journalism involved when I went to Youtube and found the following clip. I want to make sure that I’m absolutely crystal clear on this point: I found this clip. Me. And I wrote about it. So I should win the Pulitzer, and absolutely no credit should go to the real reporters who covered this story. You know why? Because fuck them, that’s why.

Anyway, here is the clip in its entirety, but if you have a short attention span, this is pretty much the money-shot:

“Two men are in jail, one cow is dead, and three cars are totaled. Now when we arrived, one of the men was actively having sex with the cow. […] We can’t show you the video, because the man was naked and covered in Jell-O”

Now I know what you’re thinking to yourself. You’re thinking, “Those Iowans, huh?” That’s what I thought too, until I made a huge sacrifice (the type of thing that Pulitzer prize winners do, I might add) and did some actual research and discovered that this news story was broken by WTNH News in Connecticut.