When Life Gives You Lemons 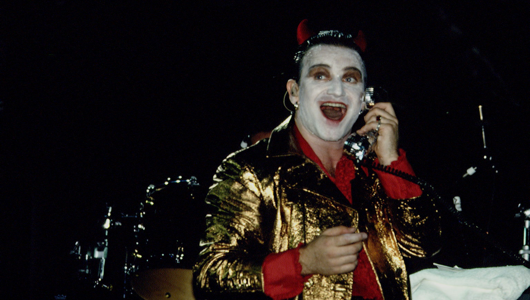 I have to apologize for something. During the course of writing yesterday’s post, I embedded a video of U2 playing the song Lemon. This was a terrible and inexplicable lapse in judgement on my part, and I find it almost impossible to apologize enough for it. I love my readers, and although from time to time I like to shake them up by posting strange and bizarre videos, this was clearly a case of going way, way too far. I should have posted a video of something easier to stomach, like Aretha Franklin getting her asshole waxed. I am sorry.

Here’s the thing with me and U2: I have a love/hate relationship with them. I have a soft spot for them, for instance, as they’re one of the last rock and roll supergroups. Think about the 1970’s for a second. Ok, now stop laughing. The 70’s had a staggering number of rock supergroups, bands that once they were formed were never, ever going to be reduced to playing the casino/state fair circuit simply because of who they were.

Those were the golden years of rock and roll, and the last two holdovers are Metallica and U2. After that, it was a non-stop parade of lesser bands that peaked too soon, flamed out, and wound up working at Denny’s. Don’t believe me? The next time you’re at Denny’s, take a close look at the busboy when he comes to clear your table. That’s Kip Winger. (Pro tip: If you want to score some really good weed, Kip won’t be able to help you out. But he will give you a hand job out back for three dollars.)

Anyway, there’s always a part of me that will look at U2 with fondness because of the link they represent to the glory days of rock and roll. On the other hand, OH MY GOD, WHAT A COLLECTION OF PRETENTIOUS TWAT-BAGS! Hey Bono, here’s a bit of advice for you: Rock stars should limit themselves to singing about things in the following categories:

Did you see third world debt on that list? You didn’t, did you? You also didn’t see violence in Africa, wildlife conservation, the rainforest, world hunger, bullying, transgender date rape, racist otters, or whatever fucking bee happens to be in your Irish bonnet at this particular point in time. You know why those things aren’t on the list? Because nobody wants to hear what you have to say about anything whatsoever. Your job is to stand up there on stage and warble about nothing in particular. 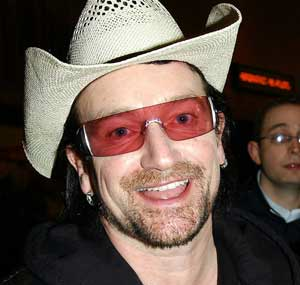 Or just stand there pretending to be a cowboy. Whatever.

Besides, charity is what you do when no one is watching. Standing on a stage, lecturing people about why they should feel bad is not only unwelcome, it’s not even your job. That’s the Catholic Church’s turf, and trust me, they have that shit fucking covered.

Another problem I have with U2 isn’t really their fault. I attended a University with a huge fraternity system and when the Joshua Tree came out in 1987, those fucking lunkheads played that shit non-fucking-stop. Every frat house you walked by had every single window open, each of them blaring the Joshua Tree at top volume for everyone to hear.

If there were two things you knew to be true about the frat boys at my college, it was that they had roofies in their pockets, and U2 on the stereo. That shit got very old, very fast.

Digression: I had a friend in college who had even more reason to hate U2: Bono fucked his girlfriend, or so he thought. What had happened was my friend (who was a HUGE U2 fan) took his girlfriend (a sorority girl) to see U2 when they played in town. She complained of a headache and went home after the show. My friend woke up the next morning to find a picture of his girlfriend positively draped all over Bono on the front page of the student newspaper. U2 had apparently decided to visit this sorority house because poon-tang, and I guess one thing led to another. I got to listen to my enraged friend call all of the hotels in town to find out where Bono was staying because he was going to go over there and murder him personally. It was hilarious. (I just did a sanity check and looked this up, and although it happened while I was in college, amazingly I was NOT hallucinating.) 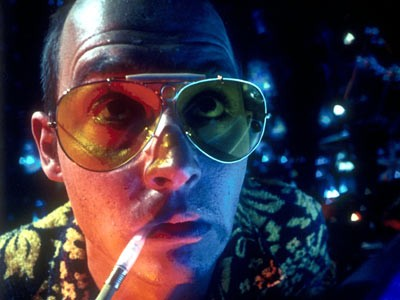 Ok, but up until this point, U2 was basically a rock band. Sure, they were fast approaching superstardom, and they had a lead singer who was actively running for Pope, but they were still just a rock band.

Then they decided to start consuming lead paint chips in bulk.

If this woman had given U2 career advice, I’m pretty sure I know what she wouldn’t have told them to do:

Consultant: Ok, Bono, I want you to put on a bunch of face paint and lipstick, fake horns, a gold lamé suit, and prance around on stage singing like you’ve got your balls caught in a wringer.

What. The. Fuck? (Ok, here is the extended version of the Lemon video, which oddly enough begins with the unfunniest prank phone call of all time. Do not watch this video unless you are heavily medicated.)

Seriously, I’m pretty sure that I could have several lobes of my brain removed and huff Scotchgard for a week yet still be able to spot this idea as fundamentally flawed. I mean, GAWD. DAMN. 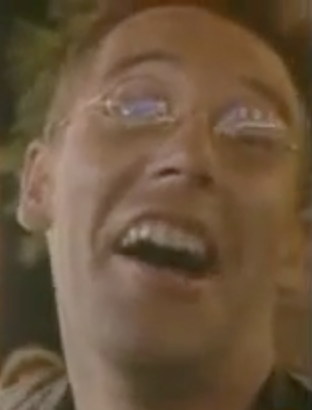 That’s U2’s bass player, Adam Clayton. A very good friend of mine would fly into an incoherent rage whenever he saw the video I Still Haven’t Found What I’m Looking For and Adam Clayton’s strange-looking mug appeared on-screen. I can’t say that I blame him.

So to make up for posting that horrendous video, I am henceforth treating this web site as a 100% U2-free zone, even if I have to begrudgingly admit that Bono does do a lot of good work in Africa.