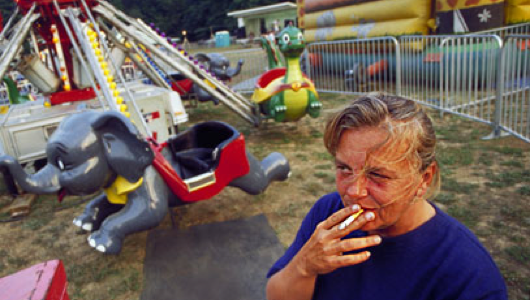 Tomorrow is the big day: Mrs. Drugs and I take the kids to the Arizona State Fair. Since our kids are 11, 5, and 3, this is a BIG DEAL even if my 11 year old daughter is at that age where she walks 50 yards in front of her parents so no one makes the mistake of thinking she’s there with anyone else. “Hey, who is that very young girl walking really fast and why are there no parents around her?” “I don’t know, but she’s obviously so mature that she’s allowed to be at the State Fair by herself. Let’s buy her a car.” That’s secretly what she believes is going to happen.

But it is amusing to watch her flail around, stuck in tweener hormonal limbo. She wants to be too cool to get excited by it, but dammit, she is FUCKING STOKED! “Hey, honey, look! There’s not much of a line over at the Death Scrambler 5000. You want to go on it?” She’ll trot out her terminally bored voice that lets you know that this is the kind of shit she does, like, a million times a day: “Yeah, I guess.” But her eyes are wide open, the grin is so big you can see molars, and she’s already sprinting towards the ride before she’s done with the sentence. Your verbal nonchalance fools no one, young lady!

My five year old remembers having been to the fair before, so he’s absolutely vibrating with excitement. My three year old, on the other hand, didn’t get to go last year so he has no recollection of the State Fair and only acts excited because his older brother acts excited. Honestly, if I coached my five year old to act excited about getting a lobotomy, the three year old would fall in line instantly. “Do you want to get a lobotomy?” “Yay! Bolotomy! Oh boy! We get bolotomy now daddy? I like bolotomy!” It’s a good thing three year olds are so cute because they are as stupid as a bucket of dicks. 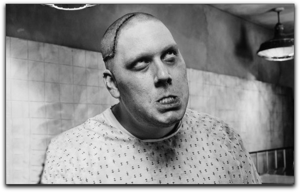 So even though it is going to be in the 90’s tomorrow, and we have to do an insane amount of walking/chasing, we’re looking forward to it. This is because the State Fair teaches you things that cannot be taught anywhere else.

Carnies: I remember the lame-ass annual carnival held in my home town when I was growing up. The population was under 10,000 so, as you can imagine, we did not exactly get the quality carnival experience. The rides were an odd mix of discarded amusement park rides and what appeared to be washing machine parts salvaged from a 1950’s era junkyard. And the carnies we got were the lowest of the low. Even as a very young child I knew there was something off about the gap-toothed guy with a mullet, a Hustler sleeveless t-shirt, and a mysterious tattoo that he would show to all of the kids. “You know where I got this here? Yeah, you don’t wanna know. That’s all I’m gonna say.” Okaaaay, Mr. Creepy.

One year, after my friends and I had discovered pot, we went on a ride called the Rock and Roll, and while we were upside down the carnie stopped the ride and came over to taunt us. “How you feelin’ now, boys?” When we responded by calling him rude names and telling him to start the fucking ride already, he informed us that, “Well, maybe instead a’ doin’ that, I’ll go inform that there police officer that we’ve got some young fellas playing around with the weed, what you think about that?” He then proceeded to tell us that for the low, low price of five dollars, he’d be willing to forget all about this little incident. Instead of paying him, I yelled, “HEY MAN, I DON’T WANT TO SEE YOUR COCK! PUT THAT THING AWAY YOU SICK FUCK!” That worked. He restarted the ride, then ran away. It took five whole minutes before people in line got another carnie to come over and stop the ride, letting us off.

So, you know, I want my kids to experience that magic. 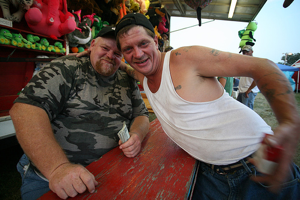 Insane food: Every year the Arizona State Fair makes a big deal out of introducing some food that you would never in a million years think existed. Deep fried Coca-Cola was big a couple of years ago. How the fuck do you deep fry a liquid? Beats the shit out of me. But if you bought some, you got a large cup full of what looked like popcorn shrimp minus the shrimp. It looked like a box of Shake n’ Bake was having an orgy. And it kind of tasted like Coca-Cola the way licking the floor of a movie theater would taste like Coca-Cola.

There’s also an emphasis on food so bad for you that I swear one year I saw Surgeon General C. Everett Koop crying in the parking lot. Deep fried Crisco, yeah, why the fuck not? And the lines for these are always the longest in the park. And the biggest.

Also, they have booths where they sell turkey legs. If you’re like me, you have to stay far, far away from these. The sight of overweight people on scooters eating turkey legs with fat, greasy lips fills me with the urge to start punching some flabby necks. Jesus, people, have a little self control. You are not King Henry XVIII!

And once again, why would I not want my kids to experience that, if only to show them that if daddy can control his murderous rage, then so can they. 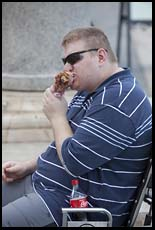 Now that Hee-Haw is no longer in syndication, Bobby-Ray decided to leave the house every now and again.

Daddy likes to scare the ever-loving shit out of his kids: Every year I’ll pick one ride that’s safe enough for the whole family but still potentially dangerous if it were to seriously malfunction. Then I’ll say this: “Boy, is this a great day or what? I’m so glad we came here today! This ride is great too. The whole family can enjoy… Hey! Did you notice that this entire ferris wheel cabin is supported by that single bobby-pin thingy over there? Wow, you wouldn’t think that flimsy piece of metal could hold this entire cabin up, especially with people in it. It’s rusty, too! Check it out, honey, that thing’s barely metal any more! It’s 90% rust! You don’t think that we’re about to… Nahhh. Never mind.”

Then I’ll wait about five minutes while my wife reassures the kids that I’m only joking. They’ll all have a laugh, maybe tell me off in a mocking manner, and start to enjoy themselves when… All of their eyes eventually return to the rusty bobby-pin and they start thinking about it. And right as they’re mentally calculating the odds of survival if that pin were to break, I give the cabin a large shake and yell, “OH MY GOD WE’RE ALL GOING TO DIE!”

That, my friends, is what the State Fair is all about.

I’ll tell you how it went tomorrow if we survive. 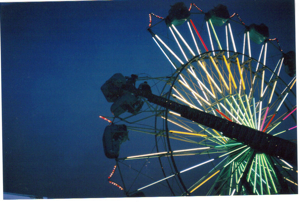 UPDATE: My wife did a little detective work and here are some of the notable “foods” available this year. This is not a joke.

I wish I was making those up, but I’m not. Seriously, it wouldn’t surprise me a bit to discover that Jenny Craig owns all of these booths and is just drumming up business. Un-fucking-believable.