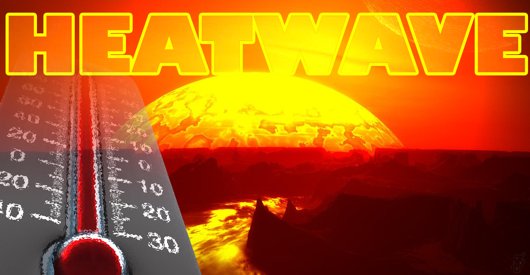 It was 109 degrees out today. That’s in Fahrenheit, incidentally. 109 degrees Fahrenheit is… I dunno, a hectare or something? I don’t know shit about the metric system because I’m American, and unless we’re talking about kilos or 9 millimeter ammo we don’t know a meter from a 3.28 foot wide hole in the ground. Suffice it to say that 109 degrees is ball-scorching hot. But then again, I live in Phoenix and it’s July, so that should go without saying, right?

Well, the Weather Channel app on my phone disagrees and took the time to inform me today that they had issued an Excessive Heat Warning for the entire metro area. What’s more, they issued the Excessive Heat Warning for (get ready for this) the daytime. Yes, just in case there are some of us smart enough to install an app on our smartphones, but too stupid to realize that things cool down after the sun sets, the Weather Channel is there to pick up the fucking slack. Thanks, Weather Channel! Maybe tomorrow you can tell us all what animal we need to sacrifice in order to ward off the Excessive Heat Demon in the future.

Anyone that lives in Phoenix knows that it’s basically an Excessive Heat Warning situation from May through September. It’s not only unnecessary to bring this to our attention, after a certain point it’s just plain rubbing it in. We get it: It’s fucking hot. Trust me, when you sit on a park bench and suffer 3rd degree burns to your genitalia, you don’t need to read the fucking memo to know that the heat is excessive. Who the fuck thinks these warnings are necessary?

Director, United States Department of Obvious: Did you inform the people in Phoenix that there is an Excessive Heat Warning in effect?

Director, United States Department of Obvious: Good. Now I want you to go tell all of the inmates on Death Row that we are issuing an Excessive Confinement Warning until such time as they are no longer incarcerated.

If you’re wondering why I’m attributing the stupidity to the United States Government, that’s because a) It is the National Weather Service that issues these warnings; and b) This is the same collection of rocket scientists that dreamt up the Homeland Security Advisory System, which I reproduce here in full: 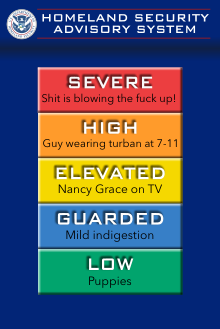 Really, is that chart necessary? Any family that changes their vacation plans because the threat level has gone yellow probably already has a Threat Bunker at home and spends their free time making homemade ammunition and complaining that Freemasons have put saltpeter in the drinking water. They don’t need a color coded chart to freak out, they’re in a permanent state of freaking out. And no one else gives a fuck.

So, in an amazing act of common sense, the United States Government did away with the Homeland Security Advisory System and replaced it with the National Terrorism Advisory System. Why? Take it away Uncle Sam:

This system will more effectively communicate information about terrorist threats…

As you can see, there are no alerts and there have never been any alerts. The world is super-peachy A-OK if you are an American, and you are free to summer on the Gaza Strip with your loved ones. Bring sunscreen.

Please note that the National Terrorism Advisory System has not issued any alerts as of this writing. This may change, so be sure to follow the NTAS Twitter feed which, if anything goes seriously wrong, will likely dole out lifesaving information such as this:

But rest assured that the Weather Channel will be there to tell the vaporized citizens of New Hampshire that they are experiencing an Excessive Heat Warning.