I Can’t Get No 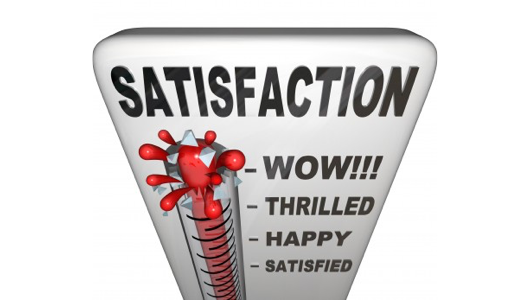 I get a lot of goofball spam in my inbox. Sure, there’s the garden variety SEO bullshit which breathlessly informs me that unless I optimize my website for search engines, I am leaving a HUGE AMOUNT OF MONEY ON THE TABLE. I didn’t realize that the market for dick jokes was that big, to tell you the truth. (Hehe: Dick. Big.) And there’s the inevitable Penis Pill spam, which promises that I can make my member longer, wider, and harder if I take a bunch of pills, but that seems a little pricey given that I can do all three of those things for free just by hanging out at the local gym during women’s spin class. (Or at least I could until a court ordered me to stay out of there.) But today I got probably the strangest and most abstract spam mail I’ve ever received.

And that was the entire email. Just the subject line, “You can have satisfaction over and over”, and nothing else.

Thank you for your recent email informing me that I can have satisfaction over and over. This came as a pleasant surprise to me, as up until this point in my life I found that satisfaction was something hard to come by at all, let alone over and over.

For instance, one time I was hired to perform as a clown at a local elementary school. They were having some sort of outdoor celebration called Fall Follies, or Autumn Escapades, or some shit like that. All I knew is that it was during happy hour, and I wasn’t too happy to find out at the last minute that I’d already committed to it six months previous, so I showed up in a bad mood.

That probably explains what happened next, although a judge ruled that “alcohol played a significant role”, which is total bullshit if you ask me because he wasn’t there when I drank all of those tequila shooters, so how the fuck would he know? Anyway, things got off to a rocky start when I started organizing a party game but put all the fat kids on one team and called them Team Ham-Ass. Some teacher got really upset about that and started jawing at me, so I told her in a very loud voice, “Lady, close your legs! There are people trying to eat here!” Which made no sense, but did manage to make things much, much worse.

By the time the evening was over, I had attempted to solicit crack from a six year old, jerked it in the teacher’s lounge coffee maker, and took a dump in a Hyundai. (I would have noted that all of those things were allegations just now, but the hi-def iPhone video used at the trial pretty much moved those things from the “Allegation” column and into the “Indisputable Facts” column. Thanks, Apple!)

Needless to say, that caused me quite a few legal headaches, and also resulted in the police obtaining a warrant to search my apartment which meant that they found those Guatemalan kids I had in there making knockoff microwave ovens out of sheet metal and parts of an old X-ray machine I “found” in a dentist’s office. Legal proceedings ensued.

Finally, after bribing half of the jury, getting convicted, then sprung on a technicality, I found myself a free man, although a free man who was up to his eyelids in debt. That night, I went out, bought a can of gasoline and burned that fucking school to the ground. Now that was goddamn satisfying. But unless I’m missing something, it’s not the kind of thing one could get satisfaction out of “over and over”. Are you telling me that I should burn down other elementary schools?

That makes a lot of sense, now that I think about it. I mean, I don’t have a beef with other elementary schools, but burning that one down felt so damn good, maybe I could just pretend that I was burning that one down again. That’d probably be a rush. And if I ran out of elementary schools, I could move on to day cares, junior high schools, assisted living facilities, nursing homes… The list is endless!

Thanks, Don! Your advice has made me see things in a new light. I really can have satisfaction over and over, and I owe it all to you!

P.S. Can you give me your supervisor’s name and email address? I want him to know what a wonderful job you’re doing, and what kind of grade-A advice you’re giving total strangers over the internet.