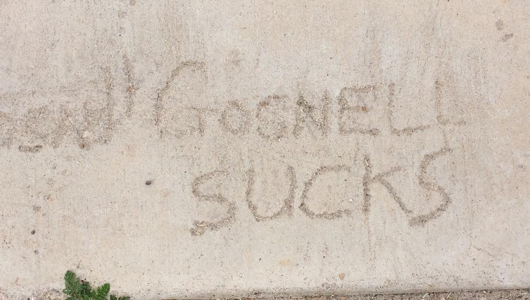 I ran across some old fashioned finger-in-the-wet-cement artwork today, and I had to step back and admire it because it has been a while since I’ve seen that kind of thing. It used to be that if there was wet cement, there was a kid lurking nearby to quickly defile it. These days those same kids are posting nude celebrity pics, defacing corporate web sites, or hacking into Indian government servers and starting a regional thermonuclear conflict by making it appear as if the Indian Prime Minister just said that “Pakistan blows goats”. And so when I read the unknown artist’s words of wisdom, “Gosnell SUCKS” I immediately agreed. Yes! Fuck that guy! Or girl! Or whatever the fuck Gosnell is! The evidence is clearly in, Gosnell, and I am afraid that you suck. Case closed.

When I was seven, there was a girl who lived in my small home town, a girl named Shannon Daley, and she literally took my breath away. Every time I saw her, it felt as if someone had sucked all of the oxygen out of the room. My stomach would get queasy and turn over a couple of times, and I would stop whatever I was doing and just stand there, slack-jawed, looking at Shannon Daley.

I can’t begin to tell you how weird this is when you’re only seven years old. At that age, I had no idea why a girl would appeal to me on any level whatsoever. Ok, maybe if she liked hurling snowballs at cars and administering charley horses to unsuspecting friends than we could hang out, but she showed no interest in any of those things and in fact didn’t even seem to know that I existed.

I grew up in a small town, a town that was known as a “bedroom community”, which sounds like something out of a Puritanical porn flick, but really it just meant that there were a lot of young couples living there who were just beginning to start families. And so although there were only 5,000 or so people in town, we had three elementary schools, all within one mile of each other. Shannon went to a different school than I did, which meant that when I saw her, it was at random times and I would find myself totally unprepared for the encounter and as a result probably acted like I belonged on a short bus. 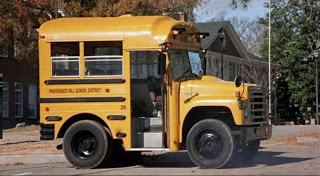 Thats me in the back, wearing a safety helmet and a t-shirt with my name on it.

Seriously, when I was young my parents and my school spent no small amount of time trying to figure out what to do with me, a kid who was reading at a fifth grade level before he got into kindergarten. I took all kinds of tests, and they discussed at great length things such as skipping grades, and special schools. It’s a good thing that Shannon Daley wasn’t present during those tests, or they’d have just slapped a dunce cap on me, handed me a pudding cup, and moved on to educating kids who weren’t drooling on the floor.

Luckily, I didn’t have to worry what Shannon Daley thought of me because I was seven and had absolutely no intention of telling her how I felt. But one day I ran across a patch of wet cement and couldn’t help myself:

This, as it turned out, was a very bad move. First of all, the patch of cement was located directly in front of a classmate’s house, and as I was the only child named Greg in the entire town, it soon became obvious to whom the sidewalk now referred.

Jenny: Yeah, I read it on the sidewalk. ♬You looooove Shannon!♬

Jesus, what a turn of events. Luckily, Shannon’s reaction was “Greg loves me? Who’s Greg?” which might have hurt my ego at an older age, but at the time suited me just fine. Maybe this would all just blow over in a few weeks, or even faster if my parents would let me change my name to Rick and move to Florida.

Shannon moved out of town later that year, but it was a small town and every so often someone would read the goddamn sidewalk and ask me about it. “Hey, who’s Shannon, and do you still love her?” The last time it happened, I was a senior in high school, for chrissakes. When I was a senior in high school, the image I was trying to cultivate was that of a badass. I smoked, I drank, I got high, and I listened to dangerous bands like Led Zeppelin (who we had it on good authority played private concerts for Satan, like, on a regular basis). This image, I felt, would appeal to girls and it’s hard to maintain that image when you seem like the kind of guy who declares his undying love for a girl on a fucking sidewalk. (At least I didn’t write that linked T-L-A True Love Always thing at the bottom, as was common on hastily passed notes in Junior High.) 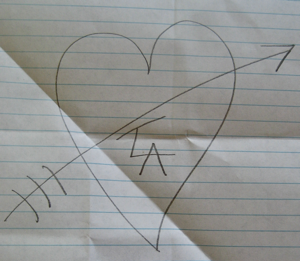 A note to prospective Junior High Lotharios: This will not have you swimming in poon-tang.

Does anyone else remember that TLA thing? I must admit, our town was so small that we had some weird lingo associated with the whole dating scene. For instance, when you wanted to ask a girl to date you exclusively, you would ask her “Will you go out with me?” Then you could tell your friends that you “asked her out”. Later on, after I had left our humble burg, this caused me some issues.

Greg: What do you mean, to where? I asked her out.

Friend: I know. To where? Where did you ask her out to? A movie? Dinner? A reenactment of the invasion of Normandy? Where?

Greg: What the fuck is wrong with you? I ASKED HER OUT!

Friend: Tell me, Greg, did you go to school on a short bus as a kid?

I guess the term I was looking for was “going steady”, which I hate because it sounds too wholesome, like someone on Happy Days coined it. If I asked a girl to go steady with me, I’d have to take her a malt-shop and shit, when all I really wanted to do was feel up her goodies. 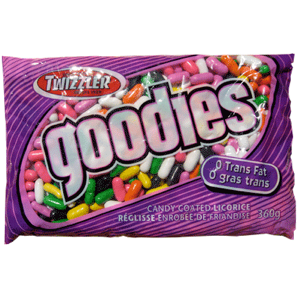 I considered looking up Shannon on the internet just now, but her name is probably too common for me to be able to find her, and I would just be looking her up out of curiosity, anyway, so fuck it. If I couldn’t talk to her 39 years ago, it would be exceedingly weird to start doing so now.

You probably don’t remember me. Actually, you certainly don’t remember me because you never knew me in the first place. But I used to absolutely freak out whenever I saw you when we were seven. Once I wrote “Greg loves Shannon” on a sidewalk, and people gave me shit about it for years.

I mean, really. If you got that email out of the blue, you’d have 27 different kinds of restraining orders issued before nightfall. Also, looking up people I used to know on the internet has become kind of depressing as time continues its inexorable march, and it’s becoming increasingly harder to comment on someone’s appearance without offending the shit out of them.

Fifteen Years After High School: You haven’t changed a bit!

Thirty Years After High School: JESUS GOD! WHAT HAPPENED TO YOU!?!?!?

Don’t get me wrong. I haven’t exactly stopped aging myself. (The other day some pimply-faced punk working at a convenience store called me “sir”, and I almost called him a whippersnapper in return.) But I don’t need to be reminded of that fact by seeing a former classmate who now looks like the Crypt Keeper. (The key to this kind of denial is to continuously pretend that you’re in an episode of Saved By The Bell, which makes things awkward at work, sure, but beats the hell out of actually getting anything done.)

So I limit my online reminiscences to things like looking at my home town via Google Street View, which is cool because I can see all of my old haunts even though I’m 1,800 miles away. Like the house I grew up in, or the field across the road my brothers and I used to play in, or my neighbor Jenny’s house where… Oh, fuck me!

The sidewalk is still there.