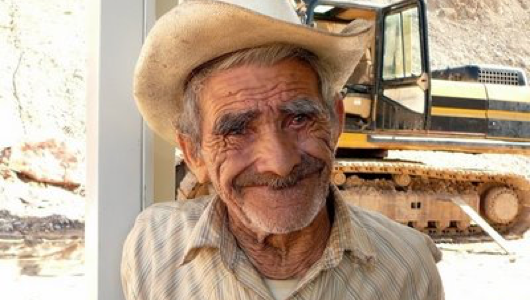 You will be happy to know that my long running streak of receiving accidental phone calls from the elderly is now at two. Last October, if you’ll recall, I received a wrong number voice mail from an old man named Ben who hails from Canada and is the most insanely polite person I’ve ever talked to. He was so over-the-top polite that after a while I started to suspect that maybe it was all a smokescreen and that he was overcompensating to hide some terrible secret. “All right, Ben,” I felt like yelling into the phone, “knock off the horseshit politeness act. We both know that you’ve got a basement cemetery full of hobos and drifters!” But knowing Ben, he’d deny it and then apologize for being so contrary.

The other night, I got another wrong number voice mail from an old man, this one of the Mexican Granddad variety. “Hello, little one! It’s abuelo! I was thinking about you! We were watching the… uhhh… The D-Backs! And, oh, little one, I miss you and love you SO much! Ok, good bye little one!”

Is that sweet or what? So once again, I decided to return the call and inform the guy that he’d misdialed, because I had this mental image of an old Hispanic man sitting alone in a dimly lit room, sadly wondering what he had done to be ignored by his little one. And I just… I mean… I couldn’t stand to… EXCUSE ME! I HAVE SOMETHING IN MY EYE!

Anyway, things did NOT go as planned. (Incidentally, imagine Cheech Marin was playing the part of Some Guy, and you won’t be far from the truth. He sounded almost exactly like him.)

Me: Hi, I got a call from this number a few minutes ago, someone looking for Little One…

Me: Someone just called me from this phone and I…

Some Guy: You heard me.

Me: What the fuck, asshole?

(loud noises in the background, rapid Spanish being spoken)

Some Guy: Hahahaha! Hey, you called a bar, pendejo. This a pay phone.

Some Guy: Yeah, so who you looking for?

Me: I dunno, some old guy wanting to talk to Little One.

Some Guy: They’re all old over here, man. This place is like a morgue.

Me: And this is a pay phone? I didn’t know they still had those things.

Some Guy: This is Safford, man. We’re lucky we have TV!

Some Guy: Hey, you should come down and have a few beers with us, esé!

Some Guy: Phoenix? What the fuck you doing talking to me? You should be out chasing putas, esé!

Me: What, they don’t have putas in Safford?

Some Guy: Yeah, and they got diseases and shit, too.

Me: Wait, let me write that down: Stay out of Safford.

Some Guy: Hahaha! You got that right!

Me: Ok, hey, thanks for the tip. Go have five or six for me, would you?

Some Guy: You’re the boss!

Me: All right, take it easy.