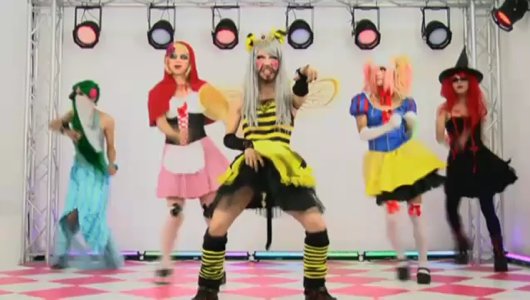 If you read the post yesterday explaining what String Theory is, well, sorry about that. I try to keep this blog 100% learning-free, but sometimes I lose my mind and skimp on the dick jokes. Again, sorry. But if you did read that post and stayed conscious long enough, you may have seen a picture of a Japanese boy-band named Big Bang. After finding that pic, I went on a tangent and spent a bunch of time perusing YouTube in search of nutty Japanese music videos. If you are at all familiar with Japanese culture, it goes without saying that I found more than enough insanity to keep me occupied for a lifetime.

Unfortunately I don’t have a full lifetime to devote to hallucinogenic Japanese music videos, mostly because my family consists of a bunch of ingrates who expect me to, you know, interact with them and shit. So instead of coming out with the definitive Japanese culture coffee table book (working title: What the Fucking Fuck?!?!?), I’m reduced to posting capsule summaries on my shitty blog. All I know is that my family better appreciate this sacrifice because even when I’m 95, I’m pretty sure I can figure out how to get kicked out of any nursing home they try to ditch me at.

(Oh, and incidentally, during my investigation I discovered that Big Bang is actually Bigbang, and they’re South Korean. So sorry for pinning this one on you, Japan. But as we shall see, you have greater crimes to answer for.)

I love really random, unexpected shit. It’s why I’ll come downstairs, walk directly in front of the TV when my kids are watching it and shout “Flagpole!” It’s random and funny. It also lets the kids know that Daddy is capable of anything, so best not to fuck with him. When I saw the following video, Doki Doki Morning by BabyMetal, I got my hopes up. The Japanese have a penchant for truly random weirdness, so mixing tweeners and thrash metal seemed like fertile ground:

After the surprise thrash intro I found myself wondering what those tweener girls in school outfits were singing about. Satan? Murder? How fucking twisted is this? I bet they’ll have these kids reveling in goat entrails before the end. Kick ass! Then about a minute went by and it turned out that this is just a Japanese Disney thrash metal training video. Fucking. Lame.

It turns out that (and yes, I actually looked this up) BabyMetal “are a sub-unit of Sakura Gakuin, the most awesome girl group ever!” [Citation not given because I don’t want to encourage this kind of shit]. So yeah, a Disney-like corporate tweener band that has a big advantage over their state-side counterparts: They can spawn sub-bands of any genre. Hateful. Doubly so since I spent the better part of today humming “Doki Doki Morning!” under my breath.

Next we have Poetic Assassin assassinating the shit out of music in general with Inverti in Darkness.

Yes, if you have the ability to understand Engrish and hear sounds seventeen octaves below low C, you may have heard such classic lyrics as “I washy my hands over and over” and “she said the moment she was born always prison ain’t shit”. Move over Bob Dyran!

And now, since this traditional Japanese music needs no introduction (and also because we need some relative sanity in here somewhere), Japanese Reggae:

Yeah, you be jamming’ mon. Now do you have the answers to tomorrow’s math homework? (A quick aside here: I know that the notion that Asians are good at math is considered a stereotype. If anyone is really offended that other people assume they’re smarter than everyone else in a given subject, then I apologize. But that is fucking insane. If there was a stereotype that 42 year old white guys with 3 kids were experts in, say, trigonometry, I would take that to the fucking bank. “Hey, asshole! You better get the fuck out of my lane before I calculate the hypotenuse and beat you fucking down! Don’t make me get all isosceles on your ass!” And yes, I just insinuated that knowing trigonometry very well gives you the ability to pummel people. Logic, obviously, is not going to be my stereotype.)

Ok, on we go to our next entry which I never bothered to attribute to an “artist” for the following reasons:

One last note of warning: This video is not suitable for children, pregnant women, or people living on the planet Earth.

I warned you, didn’t I? Our last video is classic Japan: Batshit crazy, just sexual enough to make you tell the kids to leave the room, you’re never sure who’s a guy and who isn’t, and when you’re done you feel like you’ve been dosed with four hits of acid in an upside down carnival fun-house. I give you… Whatever the fuck this is:

Uhhh… yeah. Just so you know, if you spend the rest of your life stalking, and ultimately killing me for introducing that toadstool-eyed fucking freak show into your dreams, I totally understand. I know I’d do it if I were you. Until next time when we review Mexican sitcoms, my name is Greg, and I have to go shout “Flagpole!” at some toddlers.

« Previous post
Your (Hopefully) One And Only Penis Cancer Alert
Next post »
Weekly Hypothetical – Can You Explain String Theory?