Keep That Shit On The Down Low 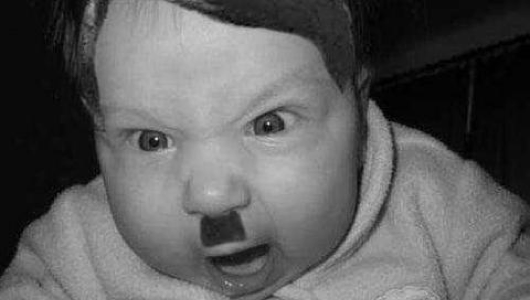 I read the other day that new evidence has surfaced that supports the claim of a man who had claimed that he was Hitler’s love-child with a young French woman. The first thing I thought was that I’m not so sure you want to be running around announcing that you’re Hitler’s son. I mean, it’s got to be hard to get second dates when you drop that little nugget of information into play during dinner. “Well, I’m an avid reader, I like to travel, and I’m the son of the mastermind behind the slaughter of six million innocent people. What about you?” At that point you may as well drop in that you’ve got herpes and that your name is Mel Gibson, because it won’t make things worse: You’re just not getting any action tonight, Adolf Jr.

The man’s story is kind of sad, actually. His mother dropped what had to be the King Kong of all bombshells on him when he was in his 40’s: “Oh, hey, by the way, you know how you’re crazy about strudel?…” He then spent over two decades pretending that he didn’t hear that before he decided to look into the claims further and discovered that it was very likely that his mom wasn’t lying and that she really had banged Hitler when she was sixteen. Come to think of it, I’m not so sure all of that research was necessary because what kind of sick, warped human being would make that claim to her son for kicks? “Yeah, it was hilarious. I told him I fucked Hitler after prom, and now he spends half his time at home in front of the mirror with a fake Charlie Chaplin mustache. Hahahaha!!!”

So I guess it’s hard for me to fathom the fact that this guy claimed (although didn’t use) the Hitler name. The way I see it, life is hard enough when your ancestors pass you genetic traits such as extreme flatulence or an IQ that dips below 100, but its got to be damn near intolerable when you walk into a job interview holding a résumé with the name Mussolini on top of it. This is why God invented “laying the fuck low”. If you keep the name Dahmer, for instance, it has to limit your possibilities no matter how unfair that may be. You’re probably not going to be a day care provider, and God help you if you work in a grocery store. “Hey, Dahmer! The deli needs some head cheese, and the meat department needs more ground Chuck. C’mon, chop-chop!” Fuck that, just change your name.

Here’s a perfect example. This man, through no fault of his own, was saddled before birth with a very unfortunate name.

Ok, first of all, kudos to this guy for having the balls to stick with the family name. If that’s the direction you want to go with it, then more power to you, Fagot. But I can’t imagine he felt that way when he was, say, thirteen, because if you’re envisioning a bunch of thirteen year old boys being understanding about a name like that, then you’re probably on the set of the fucking Brady Bunch because thirteen year olds are total fucking assholes.

So here’s what we do: We go Logan’s Run on the naming conventions. Logan’s name, for instance, was Logan 5, which is totally kick-ass. Way better than Logan Schicklgruber-Lipschitz. Kids may find it endlessly entertaining to give swirlies to little Dickie Hitler, but I bet they’d think twice before fucking with Rick 42. Rick 42 sounds like a fucking badass.

The advantages of this plan are, I believe, obvious. Another benefit is that they form a more sincere, coherent, and agreeable platform than any presidential candidate since the 70s has been able to come up with. (I’m looking at you, Newt 42!)