I Should Be The Secretary Of Transportation 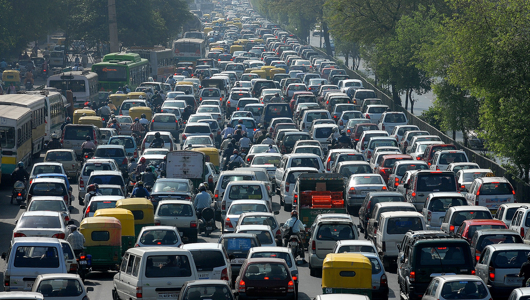 I was driving in rush hour traffic this morning when I thought to myself, “This is fucking bullshit.” This, of course, is far from an original thought. We all hate traffic. If you know anyone who says to his friends, “Hey, it’s almost five o’clock! Let’s see if we can get caught in a traffic jam on the 101!” that person is fucking crazy and you are legally allowed to administer powerful psychotropic drugs to him, even if you need a funnel and a fire hose to do so. Traffic gargles donkey-balls.

While I was sitting there, wishing that I had a disintegration ray, I started thinking of other modes of transport. The first thing that came to my mind was the airport. I wasn’t thinking of flying, however. No, I fucking hate flying with the burning intensity of a million exploding suns. Actually flying in an airplane isn’t the problem. I kind of like that. Any mode of transportation in which you can ask someone to go get you a cocktail is ok in my book. I’m not worried about crashing, and I do appreciate being able to fly from one coast to the other without having to buy a covered wagon to do so. No, more specifically, I hate dealing with people while flying. People in airports turn into horrible assholes, capable of doing cruel and inhumane things to each other at the drop of a hat.

One time, I was flying from Tucson to Chicago, and there was a delay as we were boarding the plane itself, no doubt due to some fuckhead trying to fit a refrigerator into the overhead compartment. There was a solid, non-moving line of people in the aisle ahead of me and the line extended backwards all the way on to the jetway. As I stood there, unable to move, I felt a large and constant shove in the small of my back. I turned around to see an eighty year old lady shoving me forward with her hands.

Old Bag: I need to sit down.

Me: Well, where would you like me to go?

Old Bag: Well, I NEED TO SIT DOWN!

Me: Then sit down right here. Pushing me won’t do anything. THERE IS NOWHERE I CAN GO!

Old Bag: You are rude.

Me: Lady, I don’t know how they did things back during the War of 1812, but in this day and age we chill the fuck out, bitch! 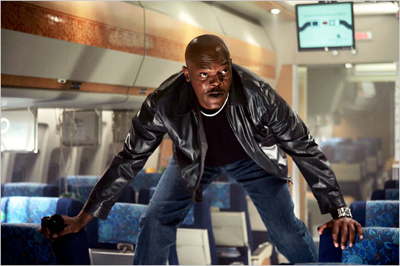 Yes, I turn into Samuel L. Jackson on a plane.

Ok, I didn’t say that last line (although I should have). I didn’t say anything because the one fear of flying I do have is being detained by security. I’m uneasy in any place where they feel the need to post signs reading “All comments are taken seriously. Please, no jokes.” I don’t think I’m going to start telling terrorism-related jokes, but with me you never know.

TSA Agent: Ok, sir, do you have any contraband in your luggage?

Me: Just the anthrax, plutonium, and a six ounce bottle of water.

No, what I was thinking about in terms of airport transportation are those awesome moving sidewalks. How fun are those things? (Answer: One million. They’re one million fun.) If you can walk down a moving sidewalk in an airport without at least wanting to walk super fast so you can feel like Usain Bolt, then you’re some humorless asshole like George Will. Or walking backwards! If gyms got rid of treadmills and installed moving sidewalks to walk backwards on, membership would skyrocket, especially if the moving sidewalks were located directly in front of a bar like they are in the airport. 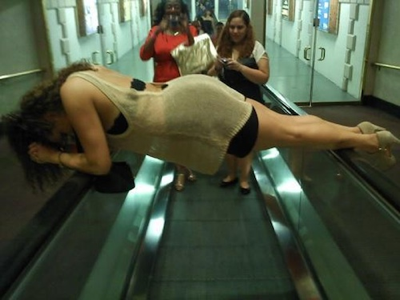 Wooo! It’s in a gym, so it counts as exercise! Wooooo!

So why can’t we have these in place of roads? Here’s how they’d work: The right lane of the moving sidewalk highway would be moving at five miles per hour. You could simply step on to the lane and stand still, and you’d be traveling at 5 mph. The next lane over would be moving at ten miles per hour. Want to go a little faster? Just move a little to your left. Boom! 10 mph. You could keep adding lanes until, in a highway situation, you’d be standing at 75 mph, swilling whiskey (legally) and totally grooving on how awesome life is.

Of course, some people would raise practical considerations that might render this plan unfeasible. This is because some people are assholes. If we can progress technology to the point where there are such things as teledildonics (incredibly, this link is safe-ish for work), then certainly we can move some drunks from one end of town to the other on a giant conveyor belt.

And make no mistake about it, drunks would be so all over this plan. You could go bar hopping all over town without a care, and bartenders would say awesome things to you such as, “Hey, want twelve more for the road?” (The correct answer, incidentally, is “Fuck and yes!”) The only downside I could see would be falling asleep on the road and waking up in fucking Cleveland. But even that would be kind of funny in that it would spawn some hilarious PSA’s:

Voice-over: This holiday season, know when to say when.

(Man shown waking up, groggy, rubbing his eyes and looking around with uncertainty until he sees a sign reading “Welcome to Cleveland!”)

Man: (shouting at the heavens) Noooooooooo!

Voice-over: Think before you drink.

Fast voice-over they always use at the end of political commercials: This message brought to you by the Committee for Staying the Fuck Out of Cleveland.

So it’s settled, we switch to moving sidewalks in… Let’s say March. That will give us time to dig up the roads. Get cracking, everyone. Assuming you can put down the teledildonics. 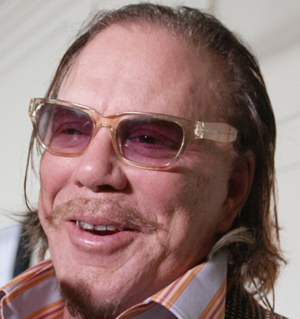 Given how many creepy pervs there are out there, maybe I oughta give everyone until July.