A Stitch In Mine 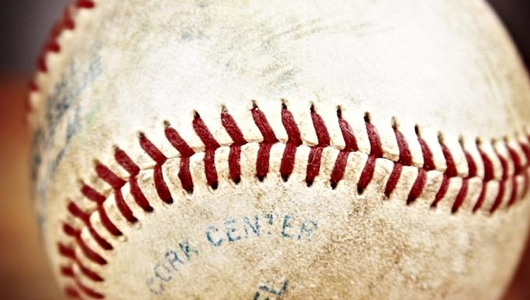 It takes a special kind of person to have kids, the kind of person that is able to drop everything at a moment’s notice, break numerous traffic laws in a high speed dash across town, and take their child to the ER (where he is known by first name). This is because kids are accident prone, spending half their time reeling around like tiny little drunkards. Actually, I take that back. That’s an insult to drunkards. I drank my ass off in college, and I only fell down and hurt myself once, and I really had to work at it. I was trying to jump down two flights of stairs, 8 steps at a time, using only my left leg. I broke a bone in my foot, and spent six weeks learning how to stagger on crutches. But I had an excuse: Extreme intoxication. Kids need no excuse other than that they’re kids.

I received a call at work at 10:00 AM this morning, and glancing at the number I immediately knew it was trouble. “Hi Greg, it’s Nancy over at day care. Your little guy took a bit of a tumble…”

“Oh, dammit. How many stitches is he going to need?”

So I had to drop everything and drive over to day care to pick him up. This makes it a clean sweep with my kids: My daughter took two stitches under her chin while fucking around on a bench in front of a restaurant. My middle son tried to cash in on a stranger’s homeowner’s insurance by splitting his head open on the flagstone walk in front of his house. That cut required four stitches to close. And now my youngest, who was running in class when he took a header into the corner of a row of cubbies, a gash that took 5 1/2 hours in the ER and six stitches to close. (Seriously, that’s like an hour a stitch. I could’ve healed him myself via wishful thinking in that amount of time.) 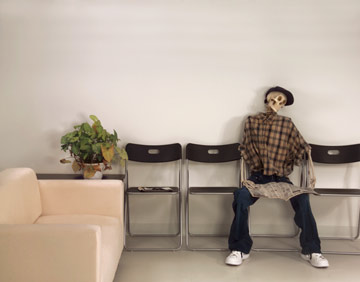 Did you know that the number one cause of death in the ER is old age? That’s 100% true! (Disclaimer: Not true)

The only good thing about the entire affair was that he was an absolute trooper the whole time. He didn’t cry at all. Contrast this with his older brother, who wasn’t quite as brave when he took one to the dome:

Ex-wife: (wild growling noises in the background) Oh my God! You need to meet us at the hospital!

Me: What? I can hardly hear you! Are you at the zoo?

Ex-wife: No, I… Hold on… (strange sobbing/gasping noises)

Me: What the fuck is that? It sounds like you’re attacking a puppy with a vacuum cleaner!

Ex-wife: (to son) I know it hurts honey, but mommy needs to talk on the phone! (explosive screams/shrieks/wails of anguish)

Me: Is everything ok? What’s going on?

The funny thing is, being a father, I knew that this was almost certainly just a minor gash that was going to take a few stitches, so the rational part of my brain told me calming things such as, “Boys! Always roughhousing, huh? A couple of stitches, and he’ll be fine.” This was reassuring to the part of me that was shitting my pants and flying down the freeway at 120 mph. (If you’re a parent, you know exactly what I mean. You could be calmly explaining to bystanders that, hey, it’s just a minor break, not even a compound fracture, but a different part of you is freaking the fuck out, wondering how much trouble you’d get in if you carjacked a Ferrari so you could get to the hospital faster.) 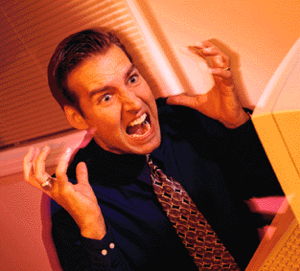 To tell you the truth, freaking out is kind of a parent’s default setting.

But my four year old was rock solid. I, once again, blew up a surgical glove for his amusement, and we spent the next five hours laughing at Bugs Bunny. When it came time to put the stitches in, I could see his tiny blue eyes peering through the hole in the dressing the doctor was using to focus on the wound. I thought he was looking at daddy for support until Yosemite Sam took a stick or two of dynamite to the pants and my son laughed. Stitches? Who fucking cares about stitches? Cartoons are on!

When I was a kid, I took nine stitches to the forehead in the backyard after my parents warned me that I’d crack my head open on the ice if I wasn’t careful. As I’m sure they would have told you, “I told you so” is of little consolation when paying ER rates. So between the three boys in the family, we’ve taken nineteen stitches in total. For three guys, that is a low number.

I remember witnessing a kid hurt himself on a playground when I was little. He fell off the top of a slide and landed head first on the ground, which was covered with bark to soften the blow of accidents such as this. If you’re thinking to yourself, “Bark?”, yes, for a short while they used bark on playgrounds instead of sand or gravel. This didn’t last long. Bark has a tendency to cause cuts when landed on forcefully enough, and this kid got a doozy of a cut: It started above the eyebrow near his temple, and followed the line of the eyebrow all the way to the bridge of his nose.

“I can’t see!” he said as he stood up. Luckily, one of his friends grabbed his hands to keep him from wiping his eyes. The kid’s whole eyebrow had flopped down, covering his eye entirely. From what I heard later, this took over a hundred stitches (internal and external) to put right. (And at an hour a stitch, that kid probably went through puberty before he left the ER.) 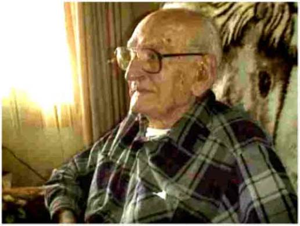 When I came in the ER for a sprained ankle, I was 13 years old!

I shouldn’t complain though, although knowing this won’t keep me from doing it. Stitches are easy. I’m more worried about getting a phone call like this: