Episode 635, In Which Pelé Plays With His Joystick 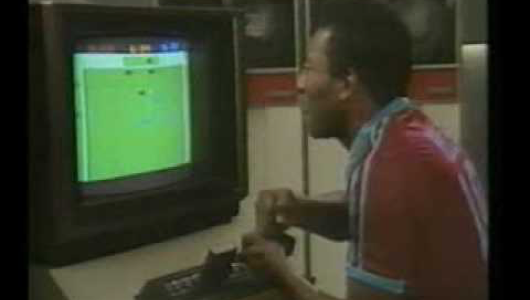 I’ve got a couple of young boys, 8 and 6, and so of course a large part of their life revolves around video games. They are crazy about videogames, and often I find myself giving them the old, “When I was your age” lecture, telling them how when I was a young boy, I played outside, and read books, and did all kinds of other things that didn’t involve dropping virtual tactical nukes on virtual villages, blowing tiny little virtual people into virtual Kingdom Come. But as I’m telling them this and rounding them up to head outside, I see what they’re playing and I think to myself, “Shit, if video games looked like that when I was a kid, I would never have left the couch.” Because they look AWESOME, and beautiful, and lifelike, and they’re everything I dreamed about when I played video games as a child because what I played looked like someone vomited on a computer and then smashed it with a pipe-wrench.

For instance, one time I was playing a football game on the PlayStation 2 and a friend walked in and, glancing at the big screen TV, said, “Kick ass! Football! Who’s playing?” Because he thought he was looking at a real game. And this was 15 years ago. Contrast that with what the first basketball game I owned looked like: 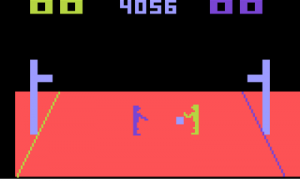 It can be kind of hard to tell without the aid of powerful psychotropic drugs, but that is a screenshot of a hotly contested game between the Purple Guy and the Yellow Guy. The score is 0-0, and there is 4,056 left on the clock. You may be asking yourself, “4,056 of what left on the clock? Seconds? Hours? Fortnights?” Hahaha, obviously you are not a Student of the Game and do not understand the subtle nuances of basketball like the brain damaged programmers working at Atari in the late 70’s did.

Atari Boss: (rubbing temples) Jesus… Ok, look, just do a bunch of random shit, and we’ll get Kareem Abdul-Jabbar to do a commercial for it and say that it’s basketball.

And that’s exactly what they did, because Kareem didn’t really seem like he gave a fuck about where his non-basketball income came from. I mean, this actually happened:

Hollywood Agent: Kareem, would you be willing to let Bruce Lee kick you in the hamstrings for 10 hours straight?

Kareem: Sure, why not? My only condition is that I get to wear hot pants. 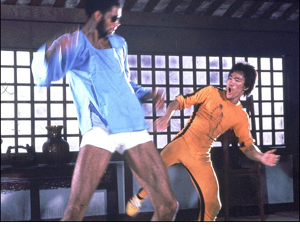 That’s from a scene in the movie “Game of Death”, or as it is alternately known, “Am I High, Or Is Kareem Abdul-Jabbar Fighting A Chinese Midget?” Here’s the entire fight scene:

I love that clip, because robbed of context it seems like it could have been a giant misunderstanding.

Bruce Lee: So I was sitting in my house in China, when this giant black guy shows up and starts sitting in my favorite chair. So I’m like, “Fuck that!” and I go over there and tell him to fuck off, and he hauls off and kicks me in the chest! And he apparently hasn’t washed his feet in like forever, because he leaves a HUGE footprint on my favorite orange racing jumpsuit. So I beat the shit out of him and broke his fucking neck.

Some Other Chinese Guy: Dude! That was Kareem Abdul-Jabbar, and he thought he was checking into the Beijing Hilton!

The important takeaway from all of this is that Kareem will do damn near anything, and he’s not above wearing hot pants or getting choked out (preferably both at the same time). So when he was given the opportunity to do a commercial for Atari, he jumped at the chance, although to be a little more accurate what he really did was stop swinging a screaming Gary Coleman around by the ankles long enough to say, “Yeah, yeah, that’s fine. Whatever.”

This is the result:

Here you can see Atari’s state of the art, two pixel graphics powered by a methamphetamine-addicted hamster in a wheel and a total lack of understanding of what objects in the physical universe look like. But that’s not important. What is important is at the 13 second mark, WHAT IN THE NAME OF ALL THAT IS HOLY IS PELÉ DOING WITH THAT JOYSTICK?

Watch that again. I’m pretty sure that the conversation with Pelé that preceded this commercial went like this:

Director: Ok, Pelé, go ahead and start playing the game.

Director: What? No! What are you doing? Jesus, that looks wrong! Just… Just… You know what? Fuck it. Roll film!

I like how at the end, Atari trumps the fact that it has over 40 cartridges, which sounds pretty impressive until you read the list of what these cartridges are.

That last one was pretty controversial. The game itself looked and played like Space Invaders, but the “music” was Jamie Farr describing a homicide he committed in 1977 in great and gory detail. It ended with him yelling, “I am Jamie Farr! I am above the law!” This was followed by the sounds of over twenty law enforcement officers subduing him with a bean bag cannon and flying elbow drops. Jamie Farr was never heard from again.

For those of you too young to remember Jamie Farr, this is what he looked like: 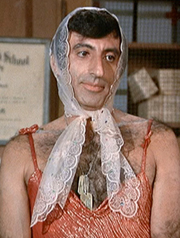 He looks like he’s getting ready for an unsightly body hair contest with Ed Asner, and that one picture tells you everything you need to know about what TV was like in the 70’s.

All right, where was I? Oh, who fucking cares? Let’s watch another Atari commercial, this one featuring Pete Rose hawking a game apparently involving crabs on acid:

Seriously, Atari, that was your best pitch? Also, Atari seemed to be operating some black-site prison facilities back in the 70’s, which now that I think about it may be where Jamie Farr has been this whole time.

And rereading all of this, I am struck by how lucky my kids are. They missed out on crappy video games, Kareem wearing hot pants, Jamie Farr, the Love Boat being interrupted by Pelé jerking it in a commercial, I mean, what the fuck was everyone smoking during the 70’s? 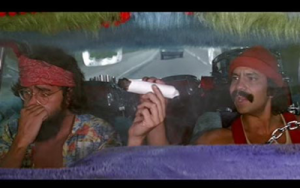 « Previous post
On Sausages, The Importance Of Keeping Hydrated, And Being Mean To The Help
Next post »
Blah Blah Blah