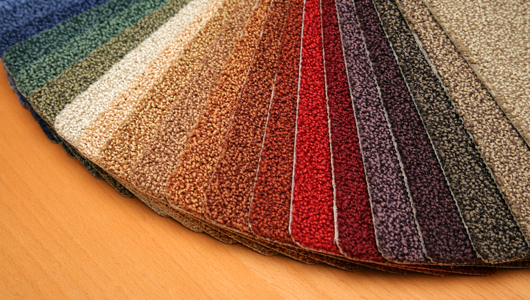 It’s no secret that I’m a fan of bad local commercials, and I’ve often posted some of the more memorable ones, such as the 80’s shitfest that is the Moo & Oink commercial, or the gloriously unhinged commercial for a foundation repair company that features a third rate Elvis impersonator on mescaline. But nothing short of a full frontal lobotomy could have prepared me for the awesomeness that is the 70’s Carpeteria Guy.

First of all, let me just start by saying that they don’t just hire any asshole to become the Carpeteria Guy. Well, they might now, but back in the 1970’s, they took that shit seriously, and if you wanted to have any chance at representing the fine Carpeteria brand on the Tee-Vee, you had to have certain demonstrable qualities:

Also, it didn’t hurt if you looked like you were on your fifth marriage and were prone to say such things as “ring-a-ding-ding, this kitty’s got claws!” And you had to have a deep and abiding love for shag carpeting bordering on the insane.

This man has all of these qualities and more. Much, much more. (Read: Crabs)

Sorry about the additional commercial footage, by the way. I think it’s fair to say that we all hope that everyone associated with the Schick Center and the Queen Mary has long since died of explosive gonorrhea for sullying the absolute perfection that is this Carpeteria commercial.

My favorite part of this commercial is at the very end, when our new Polyester God says, “Twenty-five Carpeteria stores, and there’s one near you, I’m sure.” Because the Carpeteria Guy does not have time to check up on mundane fucking details like where, exactly, these stores are located. They might all be located in one city block in fucking Compton for all he knows, but he doesn’t think so. Anyway, just… look, asshole, you can just take his fucking word for it. He is SURE that there is a store near you. Got that? NOW GO FIND IT!

Holy shit, did you catch that? Carpeteria sells RUGS too! And you know this is true because Carpeteria Guy just sat on one. Oh, sure, the rugs looked like they came from Crazy Howie’s House of Discount Rugs, but that is totally not the case, and besides, Carpeteria Guy knows nothing about whatever it was that happened over there last Saturday night after he’d had a few belts and headed out for a walk with a ball peen hammer and a pair of pliers. What’s that you say? Missing persons report? Stolen rugs? A large amount of blood? Carpeteria Guy knows nothing about it. He was probably at home, alone, working on correcting his speech impediment (he tends to say “buh” instead of “by”).

Incidentally, Carpeteria Guy wants you to know that although “good taste is not expensive at Carpeteria”, shoes like this cost a small motherfucking fortune: 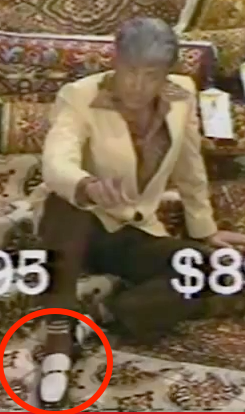 I think it was likely this pose, more than anything else, that drove fellow local commercial connoisseur Reverend Back It On Up 13 to proclaim, “I wanna have this man’s carpety babies.” Uh-huh. That’s what wives #1 – #4 said, and look where that got Carpeteria Guy: He’s shoe-rich, money poor, and the only way he’s going to make child support is if he has some goddamn luck down at the track for once!

You will probably want to rewind the commercial and write his instructions down. You look at the carpets first, then you look at the price. Do not fuck that up, because the Carpeteria Guy is at the end of his rope, and so help him, he will shave your fucking face with a cheese grater if you cross him. Carpet first, then ask about the price!

Sadly, the Carpeteria Guy was not destined to grace our television sets for long. Despondent over the breakup of his fifth marriage (to a cocktail waitress, naturally), low on money, and unable to kick his expensive polyester habit, Carpeteria Guy blew his head off with a 12 gauge shotgun. It was sad, and more than a little traumatizing for the Carpeteria customers he was helping at the moment. (Luckily, DuPont Antron III is stain-resistant, and no carpet samples were lost.) Without it’s most recognizable face, the Carpeteria chain soon fell on hard times. I mean, really:

I could give a flying fuck about your prompt installation: GET OFF OF MY TV SCREEN, YOU HUSSY! Carpeteria Guy would bang broads like you two or three at a time! (And he always referred to them as broads; we know that to be true deep in our hearts.)

People often say that they feel as if part of them is missing when a loved one dies, but I prefer to think of myself as a greater person for having known Carpeteria Guy. He may not be there to sell you carpet, this much is true, but if, late one Saturday night, you dress up in your finest leisure suit, break out a bottle of Walmart’s best scotch, and reminisce with friends about that “fine little filly” you knew in Abilene, then Carpeteria Guy isn’t really gone. In fact, in times like these Carpeteria Guy is close to you, I’m sure.