I Don’t Ike This! 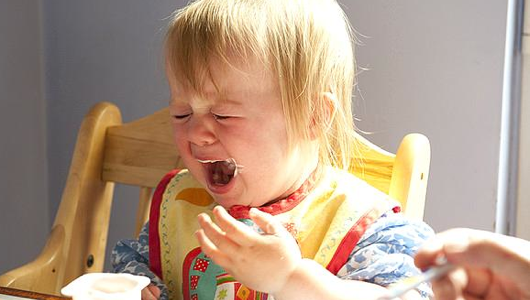 So you’re a new parent. Congratulations! Now I know it seems like you’re woefully unprepared, but it’s not that hard. It’s common sense, mostly, so just calm down. There you go… Take a few deep breaths… Much better. Ok, let’s take it from the top: Nutrition. You’ve got your food pyramid, right? Your fruits, your grains, dairy, meat, and whatnot. So let’s start with breakfast: A little milk and cereal, maybe topped with blueberries, some yogurt, some eggs would be nice. Maybe even some low fat sausage. Oh, and orange juice. Sounds like a nutritious breakfast, right? Wrong, asshole. That’s a baby you’ve got there, not a fucking garbage disposal. That fucker wants milk and it’s going to want milk for a long time. Then after that… what? No, not the fucking food pyramid. After being weaned your child will eat two things and two things only: Sugary crap and Mac ‘n Cheese. And you can shove those Brussels Sprouts right up your ass for all he cares.

Oh sure, there may be a period of time where your baby eats that smooshed up shit in a jar, but for all it knows it’s flavored milk. Babies are stupid that way. Hell, babies are just fucking stupid, period. I mean, when my kids got old enough to eat solid food, I figured they’d be ready to rock and roll so I made them a big juicy steak. And did they like it? Fuck no, they just sat there turning blue. Morons. The only thing they’d eat was mac and cheese, and not even the good kind where you squeeze the “cheese” out of the foil packet. They actually dislike that shit. They want the stuff with the radioactive cheese dust. I wouldn’t give that shit to my dog. At least not again, although it was funny to watch him staggering around the house, sneezing, with those hilarious orange clouds of dust coming out of his nose. 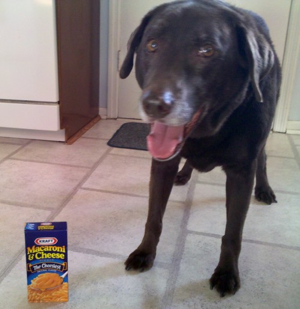 Of course, that shit is cheaper than dog food...

Anyway, you can cook whatever the hell you want: Meatballs shaped like Spongebob, broccoli stacked up to look like Barbie’s dream castle, or even the entire Blue’s Clues set made out of fish sticks. Doesn’t matter. They don’t want that. They want Mac ‘n Cheese. Here’s how every single meal begins for me:

Me: Okaaaaay, a good dinner tonight, guys! I made some medium-rare steaks, mommy made some baked potatoes with butter, sour cream and chives, we’ve got broccoli and cheese, a nice salad, and for the kids, mommy made a smiley-face sandwich with pepperoni slices for eyes, a smiley-slice of cheese for the mouth, and…

Toddler: I don’t ike this!

Me: Ok, buddy, but this is what is for dinner, and we…

Toddler: I don’t IKE THIS!

Me: Ok… (deep breath) I know that you think you don’t like it, but if you haven’t tried it…

Me: Listen, you little fucker, we spent an assload of money on this meal, and then over an hour preparing it and cooking it. I don’t care if you fucking “ike” it or not, you’re going to fucking EAT IT!

Me: Am I the only person here who is aware that our toddler only eats fucking Mac ‘n Cheese? That can’t be fucking good. So we try to get some food in him that’s good for him, that doesn’t contain fucking cheese dust or a candy coating, and OOOOOH, I DON’T IKE THIS! Well you know what I don’t “ike” pal? I don’t “ike” having Child Protective Services dropping by the house to ask WHY YOU HAVE FUCKING SCURVY, THAT’S WHAT I DON’T FUCKING “IKE”! 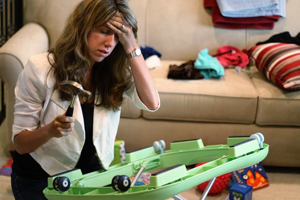 This mother finally lost it, flipping her child's highchair over and attacking her with a hammer. A jury of her peers took her out for margaritas.

Seriously, it is enough to drive you insane. The so called professionals will tell you, “Well, if he doesn’t eat it, don’t force him. But don’t give him anything else. No snacks or treats. When he’s hungry, he’ll eat what you put in front of him.” Who the fuck are you kidding, doc? My kids will refuse to shit if they don’t feel like doing so, even if they explode. They can easily hold out for a week or more. They simply get by on the unsolicited candy given to them by relatives, bank tellers, and friendly waitresses.

My children could be involved in a horrible car accident in the desert which ejects them from the car, and they would crawl for three days in the scorching sun until they are happened upon by illegal immigrants, who would drop them off at a hospital. And the doctors and nurses would take their vitals, hydrate them with IV fluids, and give them a banana for the helpful amounts of potassium, manganese, and Vitamin C, and you know what my toddler would say? “I don’t ike this!” 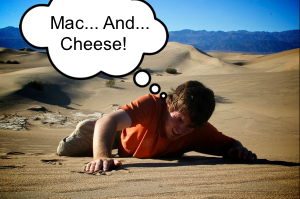 Exaggeration: My toddler is never this clean.

So you sit there, trying in vain to get the little pecker to eat anything other than Mac ‘n Cheese until that phrase is buried in your skull to the point where you attend meetings at the office during the day and you find yourself voicing displeasure with a coworker’s effort by saying “I don’t ike this!” And then you stumble across a recipe that sounds like it would help, with celery, olives, tomato juice, and other good stuff, and sure, for a while the Bloody Mary’s keep you from worrying too much about your kid’s total lack of nutritional intake, but then you’ve just had it. You give in. You go to CostCo and buy Mac ‘n Cheese in a fucking industrial barrel and wheel it home in a trailer. Mac ‘n Cheese it is. You cook the shit up for the millionth time and drop it in front of him for dinner, just not wanting to hear that phrase at the dinner table for once in your life…

“I don’t ike this! I want chicken nuggets!” Yeah, that happens. The finally get tired of Mac ‘n Cheese just when you’ve committed to it, and they fixate on something else that’s not really that great for them. If you’re lucky, they will dip those hunks of quivering chicken anus in something with a little bit of vitamin C in it and keep scurvy at bay for a little longer. And if you’re really lucky, your wife won’t get extremely pissed when you loudly announce that from now on, you’re going with free-range children and tossing their little asses in the back yard. And if you’re really, really lucky, your children will grow up healthy and strong, and learn to enjoy a balanced meal. By the time that happens with my kids, I will be old and decrepit, and will not be able to eat solid food myself without assistance. I’ll need my kids to help me. And I will immediately tell those fuckers “I don’t ike this!”

But yeah, you’re a parent now. Congratulations. Lots of luck with that.