It has been brought to my attention that the London Olympic Games 2012 gargle donkey balls. Alert reader Angus pointed me to the London 2012 web site’s terms & conditions, which clearly state that no one is to link to their site using language that is “derogatory or otherwise objectionable”. This means, one would suppose, that the complete dumbfucks running the show at the 2012 London Olympics believe that they have the right to supersede my right to free speech. Well, fuck you, 2012 London Olympics, you can cram it with fish and chips. Fuck, balls, ass-ramming pigfuckers.

This kind of shit annoys the fuck out me. Large organizations or corporations believe that they can trample all over the rights of everyday people because they’ve got lawyers on retainer and an overriding sense of entitlement bigger than the fucking Beemer wedged up their collective asses. I got laid off from a large corporation many years ago, and they told me that they would give me two weeks’ severance, but only if I signed a long legal document. I took it home and read through it (while drinking like an Irish novelist) and discovered that they expected me to refrain from saying anything derogatory about the company (even if it was true and accurate) for the rest of my mortal life. Fuck that, I scanned in that page of the agreement, changed the wording so that it read “The undersigned agrees to say derogatory things about Microage”, printed it out, turned it in, and cashed my check. Don’t tell me what I can’t say, you rancid queefs.

Anyway, that kind of shit pisses me off, and it’s why I don’t get upset when someone pretends to fall down at Walmart and negotiates a quickie $20,000 settlement out of them. Sure, they may rightly bemoan the fact that behavior like that isn’t fair, but neither is locking employees inside your store at night, dumping pesticides and motor oil into the environment, or sending new hire employees to rape fresh roadkill in plain view of an elementary school in broad daylight. (Legal note: That last statement is not true. It is a humorous way of illustrating how much of a bunch of amoral fuckbags the author believes the management of Walmart to be.)

Here’s a novel idea: How about treating your customers with respect and courtesy? How about acting as if you had a conscience? How about dealing with situations that you believe to be against your best interests on a case by case basis, and try to negotiate a settlement that doesn’t trample on the rights of everyone else in the fucking universe? If the alleged human beings running the show at the London 2012 Olympic Games acted that way from the get go, they certainly wouldn’t be dealing with some fucking crank in the Sonoran Desert saying things such as “The 2012 London Olympics can go fuck a pommel horse“. 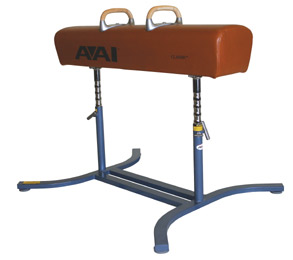 To be fair, that pommel horse is just beggin’ for it.

“Dear Greg,” they might say. “We notice that you linked a picture of a woman fellating a large rodent to our website. We wish you wouldn’t do that. The Olympics is an event that strives to illustrate the innate humanity in us all through sport, and a chick blowing a rat doesn’t really fit with the image that we’d like to project. We’d like to ask that you please remove this image that many people consider to be offensive.” If they did that, hell, I’d certainly remove the image, or at least change it to point to Walmart’s web site, especially if the correspondence came with $20,000. I may take a strong stand when it comes to free speech, but I’m not above bribery.

Update: Apparently Deadspin took note of this Olympic assholery as well on Friday.

On to what you missed while you were wondering if the London 2012 Olympic Games supports the stoning of babies with AIDS. (They don’t.)

There’s something else afoot that you should know about. If you look waaaaay, way up at the top of the page, you’ll find a link to a page entitled “Me”. Click on it. Or click this if you’re too fucking lazy to scroll. Done reading that? Good. One thing that I’d like to explain is that the caption (“A Hash-Addled Travesty of Evolution”) is a line from my capsule bio that is going to be included in an upcoming book. What book am I talking about? Shut up, it’s none of your business. Yet. (This is what’s known as a teaser.)

Ok, on to horrible music that I am forced to endure at the office. This week, Dan Hill has something to confess:

“Sometimes when we touch, the honesty’s too much.” This makes absolutely no sense until you see the video above, and then it makes perfect sense: Somebody found a homeless guy in an alley, fed him some ecstasy, and put him in front of a microphone. Gibberish, plain and simple.

It’s a brand new week people, and one that started with a new episode of Breaking Bad. Make the most of it.