The Return of BabyMetal 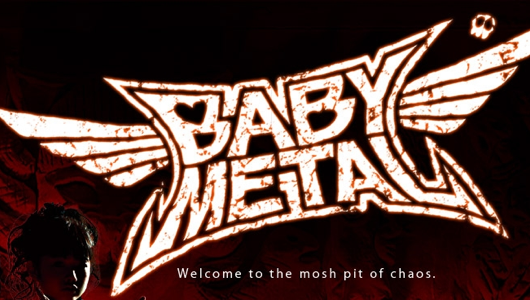 Regular, long time visitors to this site may recall a momentary fascination with Japanese WTF band BabyMetal. They were even considered (along with Mini-Kiss, Nudist Priest, and Fat Benetar) as an act for the first annual Dogs on Drugs liver-stomping party and AA recruitment drive. But if I have learned one thing during my brief stay on this planet (and I haven’t), it’s that people give you sidelong looks when you’re a grown man trying to hire thirteen year old girls in any capacity, let alone one in which they must fly across the globe to shake their asses on stage for a room full of howling drunks. It just doesn’t look right.

Still, we may have to weather the scorn and misguided suspicions of others because I have discovered that BabyMetal has been busy, and not in the going-to-school-and-learning-shit kind of busy most teens are preoccupied with. No, they’ve been busy making ears bleed (and then applying cute Hello Kitty ear-drops to victims, because that’s how BabyMetal fucking rolls). For those of you unfamiliar with BabyMetal, let’s start at the beginning, with Doki Doki Morning, a song about… Well, it’s Japanese, so it beats the fuck out of me. It could be inconsequential Japanese tweener nonsense, or it could be a promotional song for the Japanese tentacle porn industry.

Recently, BabyMetal followed up this debut with a strong sophomore effort, Headbangeeeeerrrrr!!!!! which seems to hint that shaking your children is ok if they’re into some serious, hardcore J-Pop Metal:

And finally, because nothing good can’t be made better without a sequel, Uki Uki Midnight:

I’m pretty sure BabyMetal playing the Dogs on Drugs party would be a match made in heaven, at least until the police arrived. No one would understand them, and they sure as shit wouldn’t understand us. Halting attempts at communication would result in BabyMetal’s managers barricading themselves inside a walk-in-closet where they would vainly attempt to call for help but because Japan has (typically) gotten it backwards, they’d dial 119 for hours, to no avail. (Yes, 119 is Japan’s 911. Really.)

BabyMetal Manager:  (In Japanese) You honor us with your presence, sir.

Me: Uhhh, yeah. Listen, I know this is going to sound weird, but can you ask the girls if they can play “Sometimes When We Touch“? It’s a lame song, I know, but it’s kind of an inside joke…

BabyMetal Manager: (To BabyMetal’s Publicist, in Japanese) The American drunkard wishes to touch BabyMetal. What should we do?

BabyMetal Publicist: (Responds, in Japanese) This does not surprise me. Hide BabyMetal. In order to allow the disgraceful American the opportunity to save face, I will allow him to touch me instead.

BabyMetal Manager: (In Japanese) But you are a 72 year old former Sumo wrestler!

BabyMetal Publicist: (In Japanese) Then let us hope he is very drunk.

Most people don’t know it, but this is exactly how World War II started. In 1941, a wealthy U.S. steel magnate invited a Japanese barbershop quartet over to celebrate his father’s one hundredth birthday, and the next thing you know emaciated Japanese soldiers were eating dudes in Guam. So we’d be running a risk, but I’m sure you’d all agree with me that it would be well worth it, if only to read about it in the papers the next day.

Police were called to a Los Angeles club early Saturday morning, where teenage members of Japanese band BabyMetal were found holed up in a supply closet. After freeing the band, police discovered a large cache of dangerous drugs including hash, jimson weed, bath salts, and a large quantity of black market buffalo stimulants. “These people,” Lt. Dave Singleton remarked, “were hardly aware of their surroundings, stumbling into walls, slurring their speech, and demanding that classic rock band Foreigner make them a Reuben sandwich. In my thirty years on the force, I’ve never seen anything like it.” Police made no arrests, although an extremely intoxicated man in his 40’s that partygoers referred to as “Dogs”, made off with a police cruiser and was last seen headed in the general direction of Mexico.

Yes, that sounds like a party that I want to be involved in. Who’s with me?