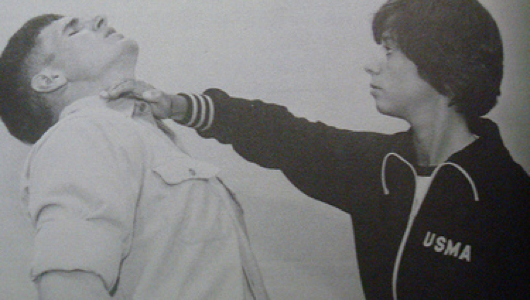 When you’re a parent, you learn to ready yourself for those inevitable panicky moments. You see your child take an awkward fall off of a swingset, you get a call from your kid’s school out of the blue, or you find a pound and a half of heroin in your daughter’s closet. (Luckily, it turned out she was just holding it for a friend. Whew!) You catch your breath, your heart skips a beat, and that familiar sinking feeling in your stomach sets in. It’s a terrible, sickening feeling, but luckily it goes away by the time your child turns thirty.

I had one of those moments today, in spades. The day started off normally enough, with my kids waking up at an hour that even Army drill sergeants would curse, a couple of errands, and then we had plans to do some coloring, get in a family hike in the foothills, and finally a nice dinner and an early bed time to rest up for Xmas Eve. The kids were finishing off lunch when I went upstairs to get a couple of things done. When I came back downstairs, I discovered my six year old had tried to pour himself some more apple juice.

Anyone who has kids will tell you that kids are clinically retarded when it comes to pouring liquid. If you needed two drops, just two drops of hydrochloric acid, which of these containers would you choose to get the two drops from? 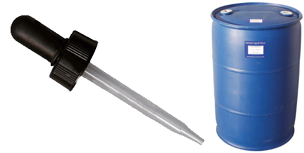 It’s a pretty simple choice, right? It is to a six year old: He’ll take the 50 gallon drum every time. And so of course he had dropped the entire container of apple juice on the floor. This had just registered when I heard a loud THWACK! and turned to see… nothing. I looked over the easy chair in the living room to see my four year old on the floor, gasping for breath and holding his throat. He had been standing on the coffee table, slipped, and fell, slamming his throat against the edge of the table.

A fractured larynx is no joking matter (wait, though, I’ll make a joke about it. I’m sure of it.). You can die from one in a matter of seconds unless someone is nearby with the wherewithal to perform an emergency tracheotomy using a Swiss army knife and a ballpoint pen, and last I checked fucking MacGyver lives nowhere near me. This was shit-your-pants kind of fear, the kind us parents are used to, although getting used to it never actually reduces the fear one iota. (There are many suggestions for how to deal with this never ending fear; I prefer to take buffalo tranquilizers.)

After a few seconds, my son started making reassuring noises (bawling, crying, screaming, wailing, you know, normal four year old noises). He could breathe, he could talk (although very hoarsely), and he could have a couple of sips of water, so although it looked scary, it was probably just that: A scare.

Of course then WebMD had to get into the mix. Knowing that throat injuries can have devastating effects, I decided that I should check with the most alarmist web site known to mankind. WebMD is like your hypochondriac uncle who won’t shake anyone’s hand because secretly he still fears the Spanish Influenza. You can easily find a fatal disease on that site by searching on the symptom “breathing”. 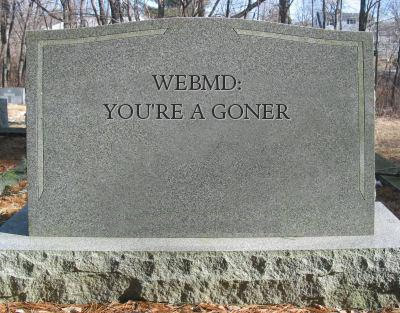 I’m not exaggerating much when I say that WebMD’s entry on throat injuries read, “Injuries to the throat area can be very dangerous, often leading to sudden death in the amount of time it takes you to look up throat injuries on WebMD.” Fuck. Off to the ER…

A quick exam revealed that my son was doing fine, which of course is doctor-speak for “we need to run some tests”. One short neck X-Ray later (actual elapsed time: two and a half hours), we were about ready to leave when the doctor returned and said, “Well, his larynx doesn’t look completely normal. We’ll have to do a CT Scan.”

As I mulled over whether or not this would take place before New Year’s, I pulled up the treatment for a fractured larynx on my smartphone. Admission to the hospital… Surgery… Intubation for… FIVE TO SEVEN DAYS?!? Oh, fuckballs!

Luckily, we were dealing with the normal hospital policy of making trivial things look life threatening. If this had been an actual emergency, they would have just casually dropped it into the conversation.

Doctor: Okaaaay, looks like this little guy took quite a tumble, huh?

Me: Yeah. He’s able to talk, though, and even had a sip or two of water earlier.

Doctor: Good, good. Ok, I’ve got some children’s Tylenol, I’m going to need you to sign some forms, we’re going to get him ready for a neck transplant, and if you’re hungry the cafeteria is open for another fifteen minutes.

So after all that, we were sent home with a child with a bruised throat and a bill artificially jacked up due to “you can never be too sure”, which is doctor speak for “I have boat payments to make”. And then I had to mop the kitchen floor because of the fucking apple juice. What else could go wrong? Mr. Plant, any ideas?

Yep, my bucket’s got a hole in it. Won’t hold no beer, or no fucking Pine Sol. Ugh.

On to the week you missed because you were half-assing it like everyone else at the office.

I’m probably not going to post a lot during the next week, because I’m on vacation, I have the kids at home, and nobody will be reading this shit anyway, so if I don’t talk to you before then, have a safe and happy Kwanzaa. We’ll start off the New Year right: By giving away a prize for the best Dick dressed up as Kenny Loggins illustration (and there is a winner, but you can still overtake it and grab that prize by blowing me away, so send in your entry!)