Talk About A Brown Eye 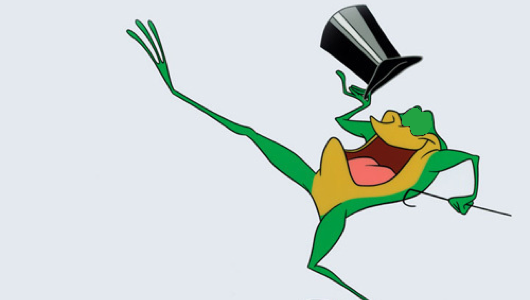 Ok, look, I don’t want to alarm anyone or anything, but recent developments have made it clear to anyone who hasn’t been drinking varnish that we are all doomed. First it was robotic sparrows, then it was cinder block throwing robo-mules and internet-assisted evil rat brains. Now we’ve got tadpoles that see out of their asses. Science has officially run amok, and it is obvious that if we want to survive as a species we must learn to burrow deep underground like the mole-people. We also need to start fucking like rabbits on Viagra, although some of us have gotten off to a head start in this regard (*cough* Tara Reid *cough*).

Yes, tadpoles now see out of their asses, thanks to researchers at Tufts University. In what one news outlet referred to as a “deeply weird experiment”, Tufts researchers grafted eyeballs on the ass-end of a tadpole so that we may know once and for all the ramifications of genetic research undertaken while incredibly stoned. Trust me, I did a lot of “deeply weird” things in college, and every single one of them involved drugs.

The only other possible explanation for this behavior would be small children, because this is the kind of research my two sons, ages four and six, would undertake. There is not one thing on this planet that they can’t turn into something incredibly hilarious by introducing butts. We go to the zoo to see nature’s majesty up close and all they can talk about for the next six months is how the baboons had purple butts. They’ll discuss it at school, draw pictures of purple butts, even bring it up to police officers when daddy gets pulled over for speeding. Butts, butts, butts, butts, butts. It never ends.

And he had. He’d made a LEGO bathroom complete with shower stall, sink, and yes, a toilet. Amazingly, he had an actual lever on the toilet that moved as well as a toilet paper dispenser. He and his brother demonstrated its use with the help of a miniature LEGO character repurposed from the LEGO Star Wars universe.

Six year old: Ok, see, the LEGO guy needs to go potty, so he comes in here, pulls down his pants…

Six year old: And there’s so much poop it fills up the potty and he starts pooping in the shower!

Police Officer: Sir, if you are on your way to take your kids to day care, I’m totally willing to overlook the fact that you were driving 110 mph in a hospital zone. 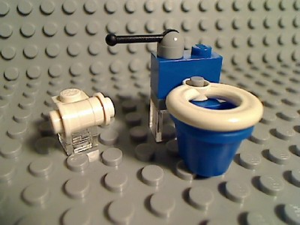 Trust me, if my boys grow up and go on to cure all known diseases, they won’t be as proud of themselves as they were the day they made a LEGO potty.

I know juvenile commode-humor when I see it, and I’m willing to bet that the Tufts researchers lost some sort of wager with a toddler. Any parent who has ever pleaded with a toddler to go to sleep knows how this happens. “Yes, daddy will invent a tadpole with eyes on his butt if you would just go to sleep!“

(Luckily, boys grow out of this phase, because if they didn’t you’d have grown men posting stories on the internet about tadpoles with ass-eyes, stool refusal, and shit-smeared rooms. And we can’t have that. Not on the internet!)

So we’re fucked. Our tax dollars are being used to fund increasingly bizarre scientific advances that push the boundaries of federally funded giggle-fits, and at the end of the day we’re being attacked by robotic animals or stared at by frog-asses, the latter obviously an attempt to disable the male population before they can defend themselves.

Mark my words, you’ll know that the end is near when they invent lizards that can reenact episodes of The Bachelor, because then the women will be totally incapacitated and there will be nothing to stop our new cyborg animal overlords.

It is clear that we need to prepare, get ready to fight to the death and do anything to save our… Hang on… Is that?… It is! Hahaha! A squirrel with tits! Hahahaha! Hahahaha! Haha-AAAUUUUUGGGGGHHHHH! 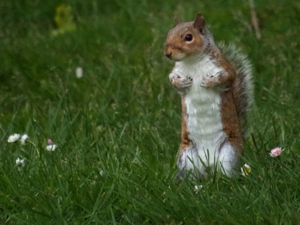