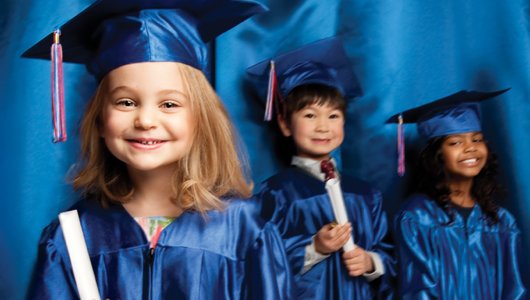 My daughter graduated from junior high school last week, which was kind of weird for me. Oh, and, my youngest son graduated pre-K as well, which is kind of ridiculous if you think about it. My kids have graduated pre-K, kindergarten, elementary school, and junior high, with high school and college graduation ceremonies in their future. It’s overdone and it waters down the meaning of graduation when you do it over and over like that. “Congratulations! You graduated recess!” Big fucking deal. The ceremonies are cheesy, and hokey, and forced, and all the kids are just kind of standing around up there doing nothing, and wow, look how big they are! I remember when they were so small that I could hold them in the crook of one arm, and how they depended on me for even the most basic things, and… and… and… Excuse me! I HAVE SOMETHING IN MY EYE!

It really was weird to see my daughter up there. There is a part of me that will always consider her to be a two year old, capable of walking, basic sentences, and little else. This is at odds with the current reality, which is that my daughter is 14 years old, sleeps until noon, binges on junk food, and does that thing with her eyes that can only be described as Power Rolling. In two years she’ll be asking me if she can borrow the car, a thought that would be sobering if it weren’t enough to drive me to drink.

If I had to choose one moment in time that summed up the mental image I have of my daughter, it would have been from an event that happened a dozen years ago. I was at the grocery store, doing something or other at the service desk when I noticed that my daughter had silently wandered off, which is a specialty of two year olds. I turned in a tight circle to make sure that she wasn’t standing right behind me, and then began the quick, methodic scan of my surroundings that is a specialty of parents with toddlers.

I spotted her by the entrance to the grocery store. As people were walking in, she was waving to them and saying “Hi!” in her impossibly adorable chipmunk-esque voice. Then she was turning around and mooning them. (I’d like to think that she’s grown out of this phase, but teenagers being what they are, I haven’t closed the book on moonings just yet.) I gently reminded her that when we’re in public, we keep ourselves clothed, then I took her home and put her down for a nap. When she woke up, she told me that I needed to take her bra shopping. I swear, it happened that fucking fast.

Sure, my daughter was only two, but she was mooning at an adult level.

The other day, I was playing with my boys in the pool, and as I was toweling off my five year old afterwards, I told him, “Can you stop growing? I want you to stay five forever.”

He surprised me twice by replying, “Me too. But I have to grow up, dad.” He’s young enough that he isn’t dissatisfied with any part of his life, but now he’s old enough to know that it won’t last forever. If it wasn’t for the fact that he still occasionally craps his pants, I’d venture to say that he was wise.

I recently read a book that put forth a theory to explain why our childhoods seem so long and how as we age, time goes by faster and faster. It has to do with the accumulation of new experiences. The more new things you’re experiencing, the more drawn out your sense of time is. When you’re a child, everything is new, and childhood takes on that forever-and-a-day quality keenly suffered through by children sitting in third period English. As our day to day lives settle down into routine, however, the newness has worn off, and our sense of time shortens drastically.

Or so the theory goes, anyway. I have a problem with it. In the last 14 years, the most radically new thing that has happened to me was to become a parent, and that’s nothing but a never ending series of new experiences, such as being responsible for the life of another human being and cleaning shit off the walls, but time has been racing by faster than ever. One moment I was a young man, responsible enough to have a career, but still irresponsible enough to decide, spur of the moment to drink a dozen beers on a Tuesday night; the very next moment, I was having The Drug Talk with my teenage daughter (“Do you have any drugs? This getting old shit is for the fucking birds.”)

Just when I started to get down on myself about this long-running, yet sudden turn of events, my son put it all back into perspective for me. After he’d solemnly informed me that he had no choice but to grow up, he looked at me and said with a shrug, “That’s ok, daddy. I’m still five today!” And with that, he put his little hand into mine. As we walked home, I marveled at the thought that my son, not even in kindergarten, was teaching me to live in the now. He was probably thinking about dinosaurs. Stinky pants or not, he may very well be the wisest person I know.