The United States of Me 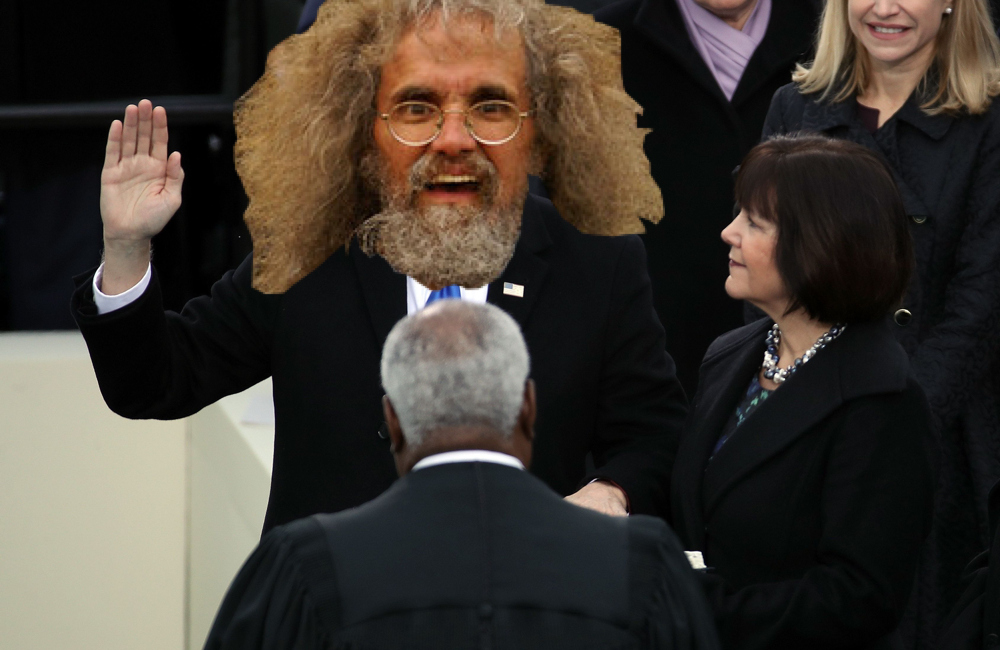 In the United States, it’s not uncommon for people to go through the trouble of incorporating themselves. They do this for a variety of reasons, the most common one being limited liability. If John Doe throws a barrel of orphans into a wheat thresher, he’ll be going to fucking jail. If John Doe, Incorporated throws a barrel full of orphans into a wheat thresher, however, his liability will be limited, which means that he will be hailed as a brilliant innovator, receive a large government grant, as well as an honorary degree at some cold, heartless institution of higher learning that specializes in murdering children, like the Wharton School of Business. That’s some pretty fucking sweet liability limiting, if you ask me, although truth be told, the orphans probably feel a little differently about it.

It was while I was limiting my liability out of a flagrant DUI charge that a thought occurred to me: If pretending that I’m a corporation gets me out of a jam, what would happen if I were to pretend that I was a country? There’s no telling what I could get away with! [There is telling, and it involves barely legal teens, oven cleaner, and a set of defibrillator paddles. Don’t ask. – Editor]

So as of this moment, I am declaring myself the United States of Me. I looked it up, and here’s the process I’ll be going through to make this a reality:

This one is easy, since there’s a pretty good template already available for free online:

… I hold these truths to be self-evident, that I am created equal (and in some cases, WAY more equal, like whenever Kenny Loggins is involved), and that I am endowed by my Creator with certain unalienable rights, such as Life, Liberty, and the Pursuit of a Decent Grocery Store Pizza that Doesn’t Taste Like Frozen Masking Tape; That to secure these rights, I institute a government deriving its just powers from the consent of the governed (i.e. me), and since I’m a government now, I totally get an army. Of course, that army will be limited to citizens of the United States of Me (population: 1), so it’s not going to be very big, or powerful, or even sober, but I’m pretty sure that if I stand tall, open my coat to appear larger, and make loud noises, I’ll be able to take over France…

When I paid my taxes this year, I overpaid by a penny to force the government to spend a stamp to send me a check for one cent. STICK IT TO THE MAN!!!

Get Involved in a Lot of Sex Scandals

The great thing about serving in the federal government of the United States of Me is that it will be damn near impossible to impeach anyone for anything:

Me: Your honor, the prosecution contends that the defense has been sexually harassing my client on an almost daily basis since his election to office.

Me: I was talking to him (points to me).

Me: I move to recuse myself from these proceedings due to their extraordinary silliness and the fact that I don’t even know who I am any more.

Me: (pounds gavel) You can’t recuse yourself! You’re not the judge!

Me: Sobriety. I can’t be expected to defend myself under these conditions!

Me: Sustained. This court will take a 45 day recess to get good and plowed on oven cleaner and jimson weed. Dismissed.

I’d like to point out that this trial takes place daily in my household anyway.

I’m assuming that this is part of the process, based solely off of my experience in high school. So I will be doing all of the following:

I won’t lie to you, this one will be tough. I’ll have to have a lot of natural resources lying around, doing nothing; I’ll have to allow my naval base (i.e. the bathroom) to be attacked to drum up public support within my own ranks (I’ll have to be at least 51% in favor of going to war); and then I’ll have to wait for France to get invaded and quickly surrender, so… I dunno, give me a week on this. Two weeks, tops.

But when I discover that I’m a Global Superpower, watch out. I will have nuclear weapons along with an almost comical lack of understanding of their dangers. So, you know, don’t do anything stupid like let your city book fucking Nickleback.

Decide That Balancing the Budget is for Chumps

For a while, I’ll take my financial obligations as a nation seriously. I’ll print serious-sounding things on my currency, such as “Legal Tender for all Debts Public and Private; Offer Void if Your Name is Earl”. And I’ll probably attend a few financial summits, but only because I hear that they’ve got some seriously top-shelf trim available for attendees.

But after a while, I’ll become bored with financial responsibility. That’s when the fun starts: I’ll incur a staggering amount of debt, encourage myself to rack up even more debt to “stimulate the economy”, and when the metaphorical wolves are at the metaphorical door, I will shoot them in the metaphorical face by endlessly raising the debt ceiling. There’s no way that strategy can ever go wrong!

But the best part of this plan is that whenever I feel lazy, I can refuse to raise the debt ceiling, triggering a government shutdown and allowing me to sit at home, drinking scotch in bed. That, my friends, is government in action, or to put it more accurately, government inaction.

Retire to a Cushy Life of Public Speaking

When I grow weary of a life lived serving the public (again, that’s me), I will retire in a moving ceremony involving speeches, flag waving, and hash oil, punching my ticket for the ultimate in retirement living: Telling people what I think of things for whopping appearance fees.

Being the president seems like a seriously shitty job, but this makes up for it all. Once you’re a former president, everybody ignores you, enabling you to say the kind of thing you wanted to say on the campaign trail, but couldn’t because your campaign manager had you locked in the campaign bus bathroom when you threatened to start talking about Mandatory Abortion Wednesdays.

For example, the following excerpt was from a speech Jimmy Carter gave to Kiwanis International in 2017:

No, you get off the stage! I was the President, motherfucker, and if you don’t like it, you can cram it sideways with walnuts. You see this guy here? His name is Tony, and he works for the Secret Service. His job is to do whatever I say, and if I say “Tony, go break that asshole’s arm in six places”, he will fucking do it. Am I making myself crystal-fucking-clear? Yes? Good.

So there you have it: I am going to become a sovereign state. And if you’re anything like me, you just can’t wait until I show up at the U.N. with orphans, a barrel, a large wheat thresher, and diplomatic immunity.