Last week I selflessly ran the very real risk of winning a Pulitzer Prize when I blew the lid off of the robotics industry’s secret plan to enslave us all with Robotic Death Sparrows. Because of this earth shattering story, several things happened: First of all, intelligent people from all walks of life began burrowing into the earth in an attempt to save their lives. (At least I did, and now my boss wants to know why there’s a huge hole in my cube.) Second, I was made to be aware that the robotics industry was not pleased with my exposé when I found the following DVD footage on my doorstep next to a pile of sparrow feathers.

Yes, the Robo-Mule now throws cinder blocks, and it is only a matter of time before it can throw increasingly heavier objects, like refrigerators, Volkswagens, and Kirstie Alley. Do not be deceived by its cute, pre-toss Robo-Mule-has-to-go-potty jig, the Robo-Mule is displeased, and if my lifeless body is found broken underneath a pile of masonry, you will know what happened.

The other consequence of my story (which, by the way, would make an excellent major motion-picture starring Brad Pitt) is that the Pulitzer groupies came out of the woodwork. Seriously, I”m drowning in girls over here. It was nice at first, but frankly I’m afraid that I run the risk of winding up like Woodward and Bernstein. After they exposed Richard Nixon’s involvement in Watergate, they weren’t heard from for years. When they finally surfaced, they were withered husks of their former selves. They tended to drool a lot, and they reeked of newspaper ink and poon-tang. It was a goddamn tragedy.

Alas, the threat does not end with robotic sparrows and mules. The latest danger comes, once again, from Duke University which has managed to link rat brains from two different continents so that they may exchange the following vital information: “I like cheese.” Robotic sparrows can peck our eyes out, robotic mules can shower us with bricks, and now distributed rat brain thinking can spread pestilence and plague via the internet. Wonderful.

And what, exactly, is your fucking problem, Duke? You don’t make enough money from your fucking basketball program, so you have to have a Mad Scientist program as well? I think it is clear that for the good of humanity, Duke University needs to be bombed out of existence, and I only partially feel that way because I bet I could make a fortune selling “Nuke Duke” t-shirts. 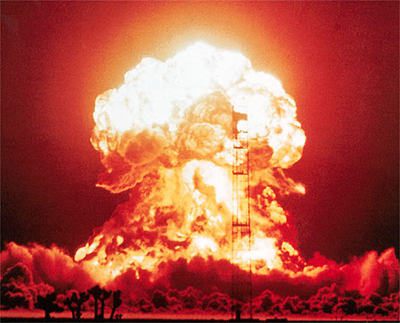 It used to be that our stupid ideas were just that: stupid ideas. The Pet Rock, for instance, was an incredibly dumb idea, and if you found that your child suckered a kid with special needs into buying one, you’d ground his little ass for a week. But it didn’t really hurt anyone, it was just a bad idea.

Even as recently as the 90’s, our dumb technological ideas were harmless. I was smack dab in the middle of the dot com era, and I personally witnessed breathtakingly idiotic ideas such as the printable potato chip. I remember literally laughing myself out of my chair at work when I read that a startup had received venture capital funding with the following business model.

Another classic case of stupidity was the smellable internet. Yes, some company wanted to sell a module that would emit aromas while you surfed the web so that when you went to Al Gore’s home page, for instance, it might smell like a pine forest, or maybe smugness. One wonders if the inventors had ever been exposed to the internet, because I have seen the internet, and I can say with 100% confidence that I do not want to know what most of it smells like. (This site, in case you were wondering, would smell like apple blossoms.)

But none of those ideas would run amok and toss a fucking cinder block at you if it felt like you had mocked it behind its back.

On to what’s been going on the last few weeks while you wept for mankind and kissed your loved ones goodbye:

Wow, I guess it has been a while since I wrote a Week in Review post, huh? I try to write one every week, but fail most of the time because it dawns on me that if I blow it off for another week, the long list of posts makes it look like I’ve been wildly productive instead of spending all my time lurking in the lingerie section at Walmart.

Honestly, ladies… Carrot Top? Wouldn’t you be afraid that he’d pull out a wacky prop at the crucial moment? I can’t imagine that the cab ride home would be a high point in your life after that. I can say that Rosie O’Donnell is probably pretty happy that more women want to smoke her pole than Hitler’s.

Finally, I would like to remind everyone once again the Dogs on Drugs is up for Best Writing of a Weblog in the 2013 Bloggies. And Hall of Fame Commenter (and all around swell egg) Vesta Vayne is up for two, including Weblog of the Motherfucking Year. If I were to win, I have made the following promises:

That’s pretty good, but I have a sneaking suspicion that I can do better. So, if I win the Bloggie for Real Good Writin’, I also promise to maybe do some of the following:

Hey, now that I think about it, I might actually do one of those if I win. Better get my slappin’ hand in shape.

Ok, that’s it. It’s a another new week. Go out and live it to the fullest, but only after you vote a few hundred times…