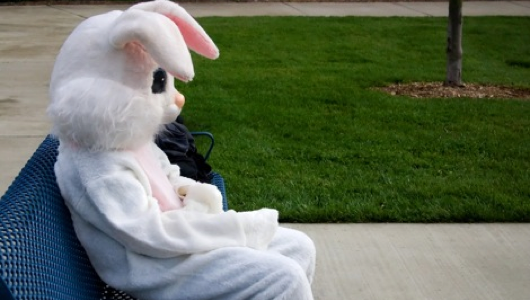 It’s funny how my kids are familiar with the entire Santa Claus mythology, yet they could give a flying fuck about where the Easter Bunny comes from. They know all about the North Pole, Mrs. Claus, their elves, the reindeer, and any of a million details related to Christmas, but nothing about the Easter Bunny. I asked my three year old, “Where does the Easter Bunny come from?” He looked at me as if I was a mental patient, threw up his arms and said, “I don’t know!” exactly the same way you would say it if I asked you how many purses Lindsay Lohan has. They really don’t give a rat’s ass about the Easter Bunny, just as long as that fucker makes with the candy.

Of course their tune changes quite a bit when they’re faced with the real thing. I dressed up as the Easter Bunny this year, and was awaiting the kids downstairs with their baskets of goodies. (We did the egg hunt the day before so my wife and I could drink wine in the park. It was fucking cool.) The kids came down, saw the baskets first, and then spied the Easter Bunny casually lounging on the couch, holding his head as if he had a massive hangover. In truth, the Easter Bunny was suffering from nothing more than misaligned eye-holes. He couldn’t move around a whole lot, or the eye holes would get totally out of whack, and he’d end up putting his head through the dry wall. And he had to hold his head because otherwise his single, way too small air hole would wander off around his ear, and then the kids would get to see the Easter Bunny unmasked and defibrillated in one day, and that’s just a tad on the traumatic side for my liking.

So my kids were very excited to see the Easter Bunny, and his frantic mascot-mugging. “Easter Bunny, why did you get me LEGO Ninjago?” Umm, I don’t know. Wave? Hands in the air? Fuck if I know how to do this mime-shit, kid. Go eat your candy. “Hahaha! The Easter Bunny tripped over my train!” So it was pretty cool, and I even did the Easter Bunny Charleston, which is just like the Charleston, only it is performed while turning blue from oxygen starvation. But when I left, the kids just said, “Bye!” while tearing into their candy. They didn’t even look up. If that had been Santa, they would’ve followed his ass out to watch him get on his sleigh, they’d have questions about his reindeer, want to meet Rudolph, etc. The Easter Bunny? “Yeah, bye, close the door so neighborhood kids don’t try to take my fucking candy.” 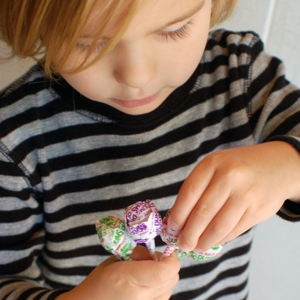 Ever see the Easter Bunny at the mall? Santa is always mobbed, but two years in a row now we found ourselves at the mall shortly before Easter and said, “Oh, hey, kids! You want to see the Easter Bunny?” And E.B. is sitting there moping because there are absolutely no people in line to see him. The surly teens that take your photo are sexting their friends, or downloading porn, or whatever it is teens do in the mall with their phones these days. It’s pathetic. My kids get up there and the Easter Bunny is kind of bitter. His pantomimes scream with sarcasm. “Hey, wow, look at this! Three kids! Three of ’em! Yeah, that makes me feel better. Santa gets more kids in his stall when he’s taking a fucking dump!” Meanwhile, the kids are barely tolerating this. They’re not really into it, but it beats the hell out of being with mommy when she starts looking at shoes.

And you know what? I agree with my kids. Fuck the Easter Bunny. I like my imaginary holiday characters to be incapable of getting mange. You can bargain with Santa Claus. You can even bargain with the Tooth Fairy. (“Since I knocked my brother’s teeth out, shouldn’t I get a 10% finder’s fee?”) But the Easter Bunny? How reliable can he be? He might leave you candy in the morning, or he might’ve gotten a little careless in Ireland and wound up as stew. And I’m not even going to get into the whole sanitary aspect of a bunny delivering you pellet-shaped foodstuffs.

Anyway, on to the week you missed while you were wondering why a bunny would be delivering eggs…

This week’s collection of dick jokes and random death threats to weathermen is brought to you by PetSmart. Although, not really. It’s another installment of Involuntary Advertising:

A funny note about PetSmart: I used to have a beagle, and I never had any problems with the neighbors complaining until this total fuckface moved in next door to me. He called the cops while he was moving in because my dog barked at the unexpected activity going on ten feet away from his gate. No knock on my door, no note, just greet the neighbors by calling the cops on them.

Well beagles do howl, and I didn’t want to get into a running beef with a neighbor or Animal Control, so I went to PetSmart and bought a citronella bark collar. It sprays citronella at a dog’s nose when he barks, and dogs hate that which totally explains why I never see my dogs eating grapefruit. But my beagle was too smart for that. He figured out that there a limited number of charges in the collar, so he’d run around in circles with his head to the side, barking his ass off until the collar was empty. Then he’d go bark at the neighbor, who he had taken a (well deserved) dislike to.

So I had to go to PetSmart to pick up a shock collar. “Don’t worry,” said the PetSmart employee, “the shock is quite gentle.” “Fuck that,” I said, “my dog needs to stop barking. I want sparks to fly from that fucker’s tail.” And it was then that I saw that right next to the shock collars were little doggy headstones. “Well, if this collar doesn’t work, I guess I already know what aisle I’ll be visiting next.” The PetSmart guy started laughing his ass off. Totally doubled over and gasping for air. The lesson? PetSmart employees love the reefer. 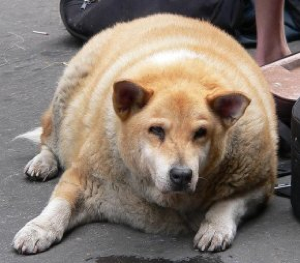 Sadly, they also include the pets on their munchie breaks.

Our voting booths jave just closed, and they are in desperate need of a good hosing down because of this week’s poll:

Since some of these are extremely foul, I’m only going to define the top two entries. The winner in a close contest was the Hot Karl, which is when you hit someone in the face with a sock full of shit. I get the “hot” part of it (I mean, I guess if you do it soon after filling said sock), but Karl?

The second entry was my favorite, which is the good old Abe Lincoln. This is when you spooge on someone’s chin, trim their pubes, stick the pubes onto the chin, and put a top hat on the person. Because, you know, this happens every fucking day and it had to be named.

The rest of the entries didn’t fair very well because people were probably grossed out before they even looked them up, or they did look them up and decided never to look at my site again. I can’t say I blame them. The Alabama Hotpocket is totally lacking any socially redeeming qualities. Disgusting.

That’s it for another seven days of our lives. One day, on my deathbed, I will look back and think to myself, “I spent an entire day fucking around, and the only thing I did that day was post a Jerry Springer clip. I want that day back!” So, I’ll set my sights high and try to top that this week. It shouldn’t be hard. 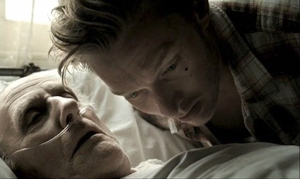 Me and my grandson, 50 years from now. "You know? I was not prepared for his last words to have that many f-bombs."